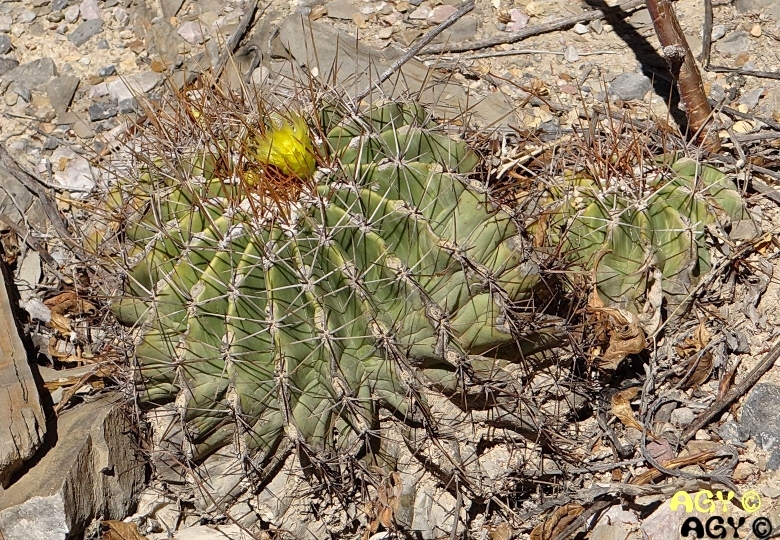 Origin and Habitat: Central Mexico in Hidalgo, Nuevo León, Zimapan, San Luis Potosi, Queretaro, Tamaulipas, and Guanajuato. Ferocactus echidne is widespread and locally abundant, at least in some part of its range. This species is particularly abundant in the Barranca de Metztitlán, in Venado, Tolantongo, Tecozautla, Mez-quital, Tasquillo, Tula River and Tollina Canyon, Hidalgo.
Altitude: 300-to 1,860(-2400) metres above sea level.
Habitat: It grows both on igneous rocks and limestone soils in the transitional zone between the matorral xerófilo micrófilo (arid submontane bushland), and the tropical deciduous forest. There are no major threats to this species. Land use changes present regional threats to subpopulations.

Description: Ferocactus echidne is a medium sized barrel cactus usually unbranched, sometimes many-stemmed when adult. There are two variations, Ferocactus echidne echidne and Ferocactus echidne var. victoriensis G.Unger, but these are not accepted by Hunt et al. (2006). There is need for taxonomic clarification, the species is also sometimes confused with Ferocactus glaucescens (DC.) Britton & Rose. The species is very variable and it is likely that it hybridizes with F. glaucescens in some parts of its range.
Stem: Sub-globose to depressed-globose, rarely cylindrical, 12-35 cm high (or more), 12-20 (rarely to 30) cm in diameter, yellowish-green, green, dull green or grey-green.
Ribs: 13 to 21, acute, not tuberculate, broad at base,
Areoles: Remote, 2,5 to 3 cm apart, velvety when young, yellowish and oval in shape.
Central spine: Solitary, 3-5 cm long, green-yellow to amber-yellow, smooth, porrect or reflexed, straight or slightly recurved.
Radial spines: 7 (sometimes 9), radiating, shorter than the central, amber-yellow beconing greyish-brown with time, rigid, smooth, needle-like, somewhat ribbed at the base, of which 3 in the lower part of the areola, 2 on the side and 3 up to 4 cm long in the upper part ( variation in number is usually on the bottom group). The lowermost usually shorter (less than 3 cm long). The secondary, if present, are reddish, then brownish yellow to greyish white, 1,5-2,5 cm, sometimes with one bristly, flexible, secondary spine in the lower part of the areola.
Flowers: Funnel-shaped, apical or subapical, 2-4,5(-10?) cm in length, 12-14 mm in diameter, lemon-yellow or greenish-yellow. Pericarpel and tube with small scales not imbricate, ovate, acuminate, somewhat fringed on the edges. Outer perianth segments about 2 cm long and 5 mm wide, oblong, margin entire, apex obtuse. Inner perianth segments linear-oblong, acute, sometimes toothed near the apex, 2-3 cm in length and 4 mm wide. Stamens pale yellow filaments about 1 cm long. Style greenish yellow, stigma-lobes 10-14, elongated, spreading or reflexed.
Blooming season: Late spring to summer. (in habitat it flowers from May to August)
Fruit: Globose to ovoid, about 3,5 cm long and 1,5 cm wide, light green to white and tinged pink, or red fleshy, with dry remnants of the perianth, not dehiscing by basal pores.Scales few scattered on the outside, pale green, persistent, acuminate and imbricated.
Seeds: Dark reddish-brown to black, very smooth, numerous, 1-1,75 mm in length and 1 mm in width. 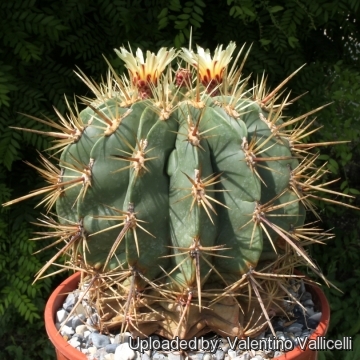 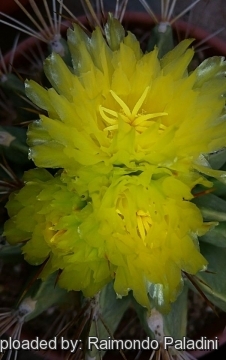 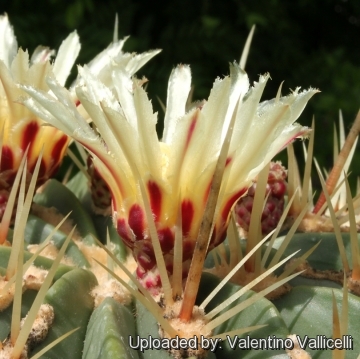 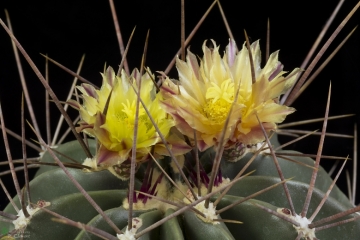 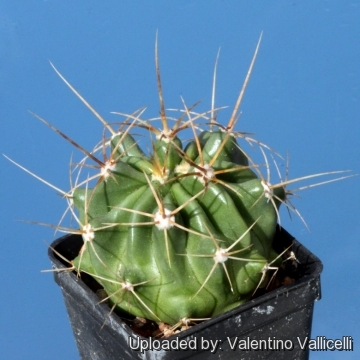 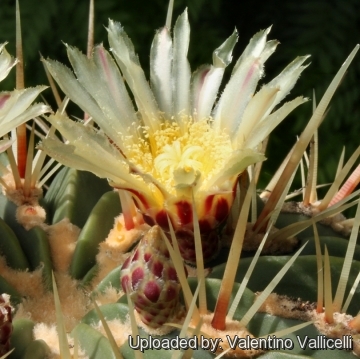 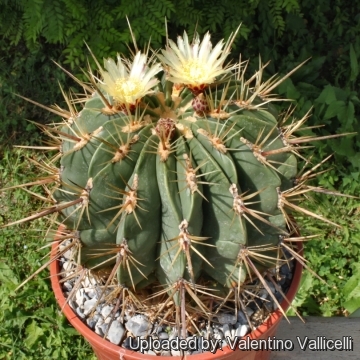 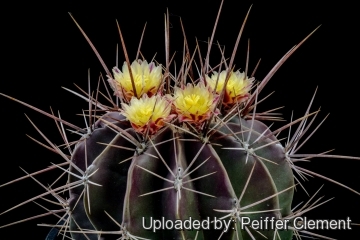 Cultivation and Propagation: Ferocactus echidne is a summer-growing and pretty easy plant thought slow to start. It makes great potted specimens, and is a great cactus for beginning collectors.
Growth rate: It is a slow growing species. Plant in good conditions will start to bloom when reach the diameter of only 15-18 cm.
Soil: It grows well in a rich, well drained soil such us clay, pumice, lava grit, and only a little peat or leaf-mould, but it isn't picky about soil.
Repotting: If potted, repot them preferably in the spring, if their roots become cramped. Generally, they should be repotted every other year in order to provide fresh soil. However, this doesn't necessarily mean they'll need larger containers. Fill about a quarter of the pot with broken crocks, gravel, etc. to promote good drainage. After repotting, do not water for a week or more. Use pot with good drainage. Eventually, as the plant becomes mature grow it slowly, and adopt a new repotting period, using intervals of every 2 - 3 years. Additionally grow it under drier conditions or with stronger sunlight.
Watering: Water regularly during the summer so long as the plant pot is allowed to drain and not sit in a tray of water (It rots easily, especially if over wet), and also needs to be avoided wetting the body of this plant while it is in sunlight. A wet cactus in the sun light can cause sun burning which can lead to scars or even fungal infections and death.. Let dry between watering. During hot weather you may need to water the plants more frequently so long as the plant is actively growing. From late September watering should be reduced to force the plant to go in to a state of semi dormancy, by October you should be back in to the winter watering regime. If the soil is allowed to be dry for too long root loss could follow but equally the same result would occur if the plants are both wet and cold. From March onward the plant will begin to grow and watering should be increased gradually until late May when the plant should be in full growth
Fertilization: Feed with a high potassium fertilizer in summer. Feeding may not be necessary at all if the compost is fresh then, feed in summer only if the plant hasn't been repotted recently. Do not feed the plants from September onward as this can cause lush growth which can be fatal during the darker cold months.
Hardiness: When dormant, the plant is somewhat frost tolerant (down to nearly -5° C for short period of time), but when left out it is more sensitive to frost. However warmth throughout the year will increase the grower's success (at minimum temperatures above 5 degrees centigrade during rest season). During the summer it is best to keep the plants outside where the temperature can rise to over 30 C with no harm to the plant. This plants need a period of cool rest in winter to produce flowers abundantly.
Exposure: They do need a lot of light to develop their typical spination, but different clones vary in their tolerance of full sunshine. However some protection in light shade is recommended during the hottest hours in summer. It can tolerate moderate shade, and a plant that has been growing in shade should be slowly hardened off before placing it in full sun as the plant will be severely scorched if moved too suddenly from shade into sun. If kept too dark they may become overly lush and greener and could be prone to rotting due to over watering.
Ornamental uses: It is an excellent plant for container growing. It always looks good and stays small. It looks fine in a cold greenhouse and frame.
Food uses: The utilitarian value of Ferocactus echinae is well known. Once the spines are cut, the stem is used as fodder and to prepare the crystallized candy called "citrón or dulce de biznaga". The spongy water-storage tissue from large mature plants of Ferocactus, but also of Echinocactus, and other similar cactus species is cut into cubes and boiled in syrup until it crystallizes. The candy is eaten as is or used in pastries, cakes and sweet tamales.
Diseases and pests: Watch for infestations of mealybugs, scale insects and spider mites. Rot is only a minor problem with cacti if the plants are watered and “aired” correctly. If they are not, fungicides won't help all that much.
Propagation: Seeds are the only way of reproducing, remembering that seedlings dislike strong light and dry conditions and need to be repotted frequently. Seed Collecting: Permit fruit to ripen. Fruit must be significantly overripe before harvesting seed; clean and dry seeds.