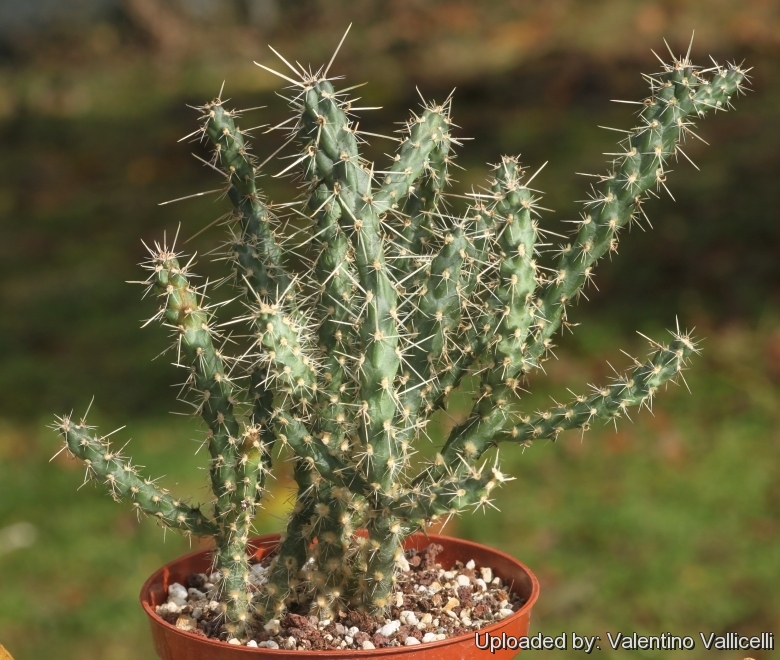 Origin and Habitat: Cylindropuntia whipplei is endemic to the United States, occurring widely in the Great Basin in Southwestern Colorado, southern Utah (Beaver, Iron, Kane, Millard, San Juan, and Washington counties), Nevada, western New Mexico, and Arizona (Apache County to Mohave, Yavapai, and Gila Counties).
Altitude range: 900 to 2,300 metres above sea level.
Habitat and Ecology: This species grows in upper-elevation deserts, temperate grassland and temperate scrub. The species also occurs among sagebrush in oak, pinyon or pine forest, and juniper woodlands, it has solid cold-hardiness. This is an extremely abundant species stable and not threatened - the more it is grazed the better it grows. The species can become a noxious weed in over-grazed grassland. It is known to hybridize with Cylindropuntia echinocarpa and Cylindropuntia acanthocarpa.

Description: Much more compact than most other chollas, whipple cholla (Cylindropuntia whipplei) is a low mat forming or upright succulent shrub, sparingly to much branched, without a well-developed trunk. In appearance, it is highly variable. The height and width of Cylindropuntia whipplei varies widely with growing conditions. In some locations of its range, Cylindropuntia whipplei grows to 1,3 metres tall in massive thickets; in other locations the plant grows to about 30-50 cm tall and spreads to several metres in diameter in an open shrub-like formation; and in still other locations it grows in a dense low mat. Most of the selections chosen for garden cultivation are densely covered in glass-white spines that glow when backlit. Cylindropuntia whipplei flowers are large and yellow-green.
Distinguishing characteristics: This species has fruits fleshy at maturity; stem segments up to 15 cm long and 2.2 cm wide; up to 10 spines per creole. The yellow-green flowers contrast brilliantly with its white spines. In addition, Whipple cholla branches in whorls or nearly so.
Derivation of specific name: Whipplei honors Amiel Weeks Whipple, a 19th-century engineer and surveyor with the Mexican Boundary Survey.
Stems: The stem segments are lender, green, 3-15 cm long and 5-22 mm thick. The tubercles are prominent, up to 10 mm long and 5 mm wide.
Areoles: Oval to triangular, filed with pale yellow to white wool, ageing grey, and with yellow, tan, or whitish glochids 1-3 mm long.
Spines: 1-10 (mostly 3-8), more numerous in the basal areoles, white to reddish brown, sharp, straight and awl shaped or flattened, dimorphic. Distal spines 4-6, stout, spreading to form a cross, 2-4.5 cm long. Basal spines usually 4 and lateral, slender, flattened basally, bent backward, 5-8 mm long ans covered with thin, white to pale yellow persistent papery sheaths.
Flowers: Up to 3 cm long and 2 cm in diameter, with greenish-yellow, pale yellow, or yellow tepals.
Blooming season: The species flowers in late spring to early summer (May to July).
Fruits: Broadly cylindrical to nearly round, pulpy to fleshy at maturity, yellow to greenish yellow 18-35 mm long, 15-32 mm in diameter and spineless.
Seeds: Tan and up to 3 mm long.
Similar species: Plants in the trade might be confused with silver cholla (Cylindropuntia echinocarpa), but whipple cholla can be distinguished by its bumpy yellow fruit. Cylindropuntia whipplei might be confused with Cylindropuntia imbricata but the latter has lavender-purple flowers, commonly grows from 120 to 150 cm tall, has one to few, thick main stems at ground level, and its stems are twice the diameter of Cylindropuntia whipplei. The two species probably hybridize. One possible hybrid is Cylindropuntia viridiflora. C. whipplei can also be confused with Opuntia fragilis.

Subspecies, varieties, forms and cultivars of plants belonging to the Cylindropuntia whipplei group 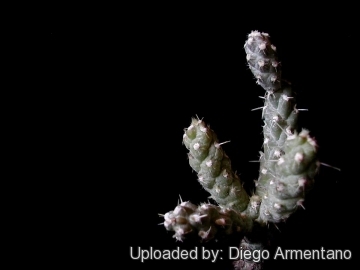 Cylindropuntia whipplei Photo by: Diego Armentano
Send a photo of this plant.

Cultivation and Propagation: The whipple cholla Cylindropuntia whipplei is a a much decorative hardy cactus occasionally grown for horticultural purposes. It is a summer grower species that offers no cultivation difficulties. Its cylindrical densely spiny joints provide a striking accent for an otherwise dormant cactus garden. Along with Cylindropuntia imbricata and Cylindropuntia spinosior, whipple cholla forms a trinity of cold-hardy species for high elevation rock gardens.
Soil: Use a very a particularly draining substratum, as it is sensitive to rottenness when in presence of humidity and low temperatures and let the soil dry out between waterings, since it's natural habitat is in sandy or gravelly, well draining soils.
Repotting: Repot in the spring, when their roots become cramped. Generally, they should be repotted every other year in order to provide fresh soil. After repotting, do not water for a week or more.
Water: In summer, during the vegetative period, it must be regularly watered, but allowing the substratum to completely dry up before irrigating again (but do not overwater ); in winter, it’s to be kept dry. Preferable not to water on overcast days, humid days or cold winter days.
Hardiness: It is a quite frost resistant cactus, hardy to - 12° C (or less if very dry). However in cultivation it is better not to expose it to temperatures lower than 0° C, even if in an aerated and protected location, in order to avoid the formation of anti-aesthetic spots on the epidermis. In presence of high atmospheric humidity avoid any frost as it is particularly sensitive to root rot. USDA Zone 7-10. It can handle extremely high temperatures in summer.
Exposure: Outside full sun or afternoon shade, inside needs bright light, and some direct sun.
Use: It is suitable for “desert” gardens, in association with other xerophytes. Where the open air cultivation is not possible due to the climate, it is to be cultivated in pot in order to shelter it in winter.
Other uses: The fruits of Cylindropuntia whipplei are utilized by the Hopi Indians for food and for seasoning food. However the fruits have an unpleasant smell so they are unlikely to be eaten. The roots of whipple cholla are used medicinally. The Hopi pound and boil the root, then drink the liquid or chew the roots, to treat diarrhea. The Zuni people rub the spines off the fruit and then dry them for winter use. The dried fruit is also ground into a flour, mixed with ground corn meal and made into a mush. Spineless fruits are eaten raw or stewed.
Warning: It is armed with treacherous spines that are extremely sharp (This is one of the most dangerous of all cactus). Handle it with extreme caution, and keep it away from gangways and areas frequented by children and animals. Spines must be meticulously removed with tweezers.
Propagation: Propagation: scarified seeds, stem division. The stem segments root easily and grow rapidly when placed in loose, well-draining soil.