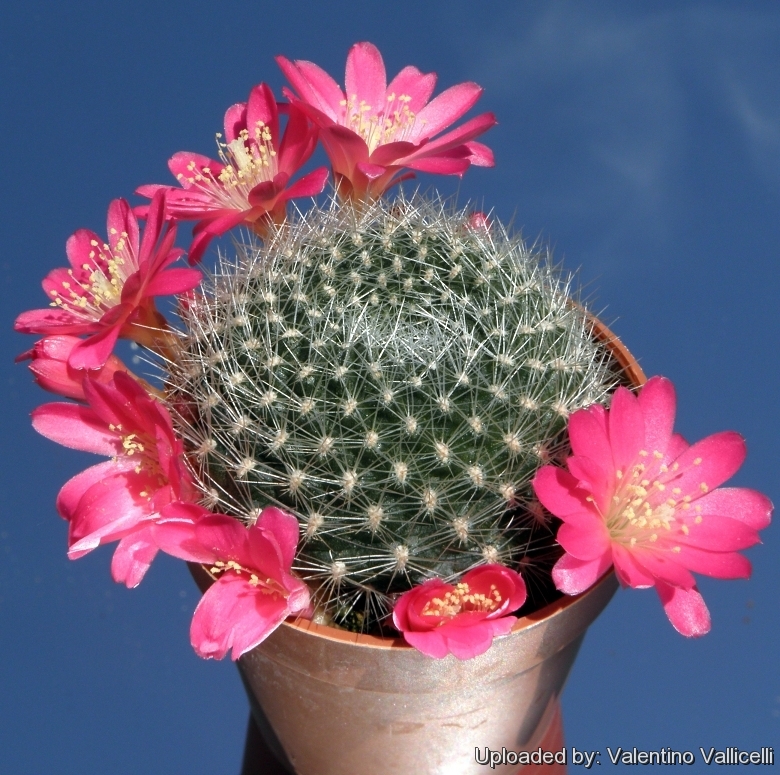 Description: Rebutia violaciflora var. albispina is one of the many forms of the extremely variable Rebutia minuscula. It has peculiar pink-violet flowers and bright glassy-white spines somewhat intermediate between the short, bristle-like spines of Rebutia minuscula and the fairly long, flexible spines of Rebutia senilis. It is very similar to Rebutia senilis var. lilacino-rosea|SN|15484]] Backeberg, but spines are usually longer and whiter.
Habitat: It is solitary or clumping and in age can grow clumps 10-15 cm wide. Each head is surrounded by a complete ring of pink-violet flowers produced from around the base of the plant. It begins to offset in about its third or fourth year, eventually making a moderately tight clump, with the individual stems standing out a little on their own.
Roots: Fibrous.
Stem: Squat, depressed globose (or somewhat spherical to slightly elongated in cultivation), deep green, up to 7 cm in diameter and 4-6 (or more) cm tall.
Ribs: 16-21 spiralling with low, vertical or slightly spiralled with distinct tubercles.
Tubercles: Low, flat conical in two downward spirals, in ratio 8:13.
Areoles: Circular, about 1 mm wide, white tomentose.
Spines: Approximately 25, radiating to upright, hardly distinguishable as radials and central, variable, short bristle-like, flexible, 5-10 mm long, pure white and translucent.
Flowers: It produces a larger crop of funnel-shaped pink-violet flowers, about 30 mm long and 35 mm wide. Filaments whitish, anthers yellowish. Style free to base pink with 4-5 white, spreading stigma lobes slightly protruding above the anthers.
Blooming season: Flowers all tend to come in one Spring rush, rather than spread over the Summer. It is usually one of the earliest rebutias to flower in spring.
Fruit: Spherical, yellowish red or brownish, to 5 mm in diameter. 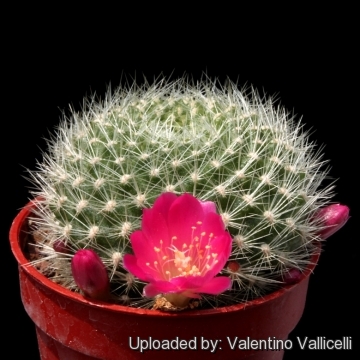 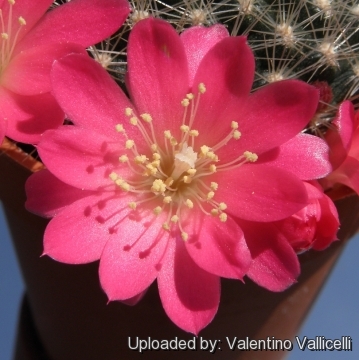 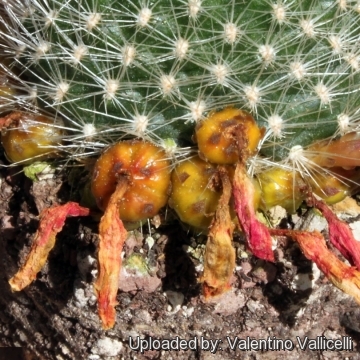 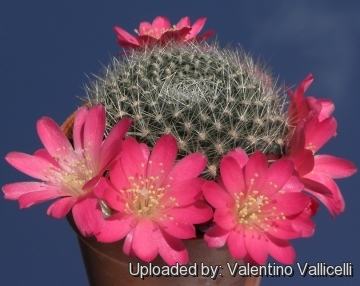 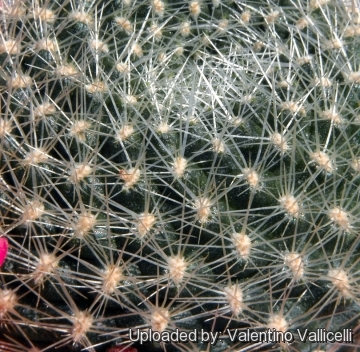 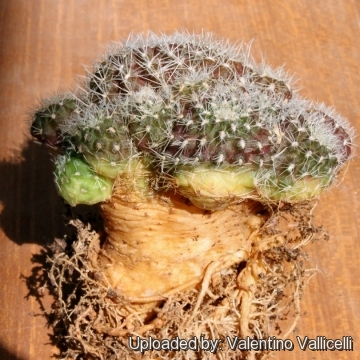 Cultivation and Propagation: Rebutia violaciflora var. albispina is a summer grower species that is easy to cultivate and recommended for beginners. The whole Rebutia minuscula complex has delightful flowers and the plants remain compact, and clumps can easily be managed by division. Another advantage is that the plants are very cold hardy in Winter if kept dry.
Growth rate: It is a slow growing but easily flowering species that will make clumps given the best conditions.
Soils: It likes very porous standard cactus mix soil with a pH slightly on the acidic side.
Repotting: This species will occupy a small flower pot comfortably and remain a manageable sized house plant, repotting should be done every other year or when the it has outgrown its pot. Use pot with good drainage.
Watering: Needs moderate to copious waterings in summer, but do not overwater (the root system is rot prone) and allow the pot to dry out between waterings. Keep dry in winter at a minimum temperature of 0°C.
Fertilization: Feed with a high potassium fertilizer in summer.
Hardiness: It is reputedly resistant to frost if kept on the dry side prior to, and during, cold weather and requires a winter rest period (hardy to -7 C ° C, or less for short periods), but for safe cultivation it is best to avoid freezing temperatures. It does not like high temperatures in summer, and will be perfectly happy in pots outdoors from April to September if protected from torrential rain and hail
Exposition: The plant tolerates extremely bright situations but enjoys filtered sunlight or afternoon shade, inside it needs bright light, and some direct sun. Tends to bronze in strong light, which encourages flowering and heavy spine production, but is likely to suffer from sun scorch or stunted growth if over exposed to direct sunlight during the hottest part of the day in summer.
Uses: It is an excellent plant for container growing. It always looks good and stays small. It look fine in a cold greenhouse and frame or outdoor in a rockery.
Pests & diseases: It may be attractive to and liable to damage by spider mites and thrips
but plants in good condition should be nearly pest-free, particularly if they are grown in a mineral potting-mix, with good exposure and ventilation.
Rot: This species is particularly easy and accommodating, seldom suffer of cryptogamic diseases. Rot it is only a minor problem with rebutias if the plants are watered and “aired” correctly. If they are not, fungicides won't help all that much.
Propagation: Division, direct sow after last frost. Seeds germinate in 7-14 days at 21-27° C in spring, remove gradually the glass cover as soon the plants will be well rooted (ca 1-2 weeks) and keep ventilated, no full sun for young plants! To make a cutting twist off a branch and permit it to dry out a couple of weeks, lay it on the soil and insert the stem end partially into the soil. Try to keep the cutting somewhat upright so that the roots are able to grow downward.
Note: It would appear that in cultivation they grow larger and cluster more vigorously than in habitat.