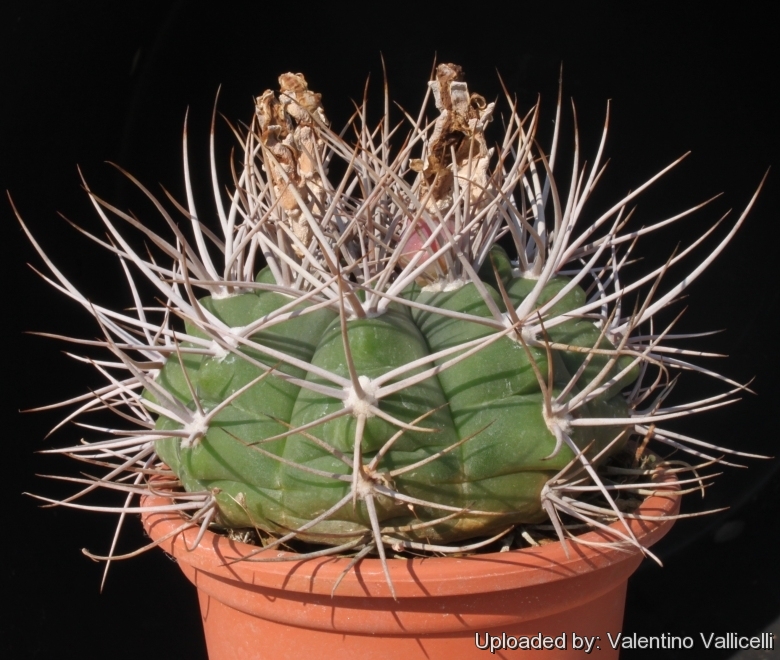 Origin and Habitat: La Rioja, Argentina.
Altitude: 800-2900 metres above sea level.
Habitat: It grows in various environs and elevations in hilly terrain and steep slopes, among stones, grasses and bushes together with Tephrocactus papyracanthus and Pyrrhocactus catamarcensis.

Description: Gymnocalycium hossei var. nidulans is one of the several forms of the very variable Gymnocalycium hossei which form a complex of related taxon. It is still unclear whether this variable complex is one or several species. There is so much variation even in the same population that most authors choose to lump them together. The variety "nidulans" distingushes for the dense covering of stout grey interlacing spines. The plants typically got a dull brownish-green body colour and is one of the most decorative cacti of the genus Gymnocalycium.
Habit: It is a geophyte, stem succulent plant usually solitary and barely rising above ground level with a swollen underground root system.
Stem: Globular, somewhat flattened and slightly depressed at the centre (or slightly elongated in cultivation), dark grey-green, olive-green, dark chocolate brown or red-violet, up to 10 cm in diameter.
Ribs: About 17 straight, broad, flat, divided into angular warts with prominent angular chins below the the large woolly areoles , with narrow furrows between them..
Areoles: Oval 10-15 mm apart, slightly furnished with yellowish grey wool.
Central spine: Occasionally one central, brown, becoming grey with age up to 4 cm long.
Radial spines: 6-7, pinkish-brown, turning grey with dark tips spreading, curving backward encasing the brown body, one pointing downward, others to the sides, brown, becoming grey with dark tips, usually up to 30 (or more) mm long, but quite variable in length.
Flowers: Near the apex, 70 mm in length and 60 mm in diameter whitish to reddish pink, sometimes with brownish tint, with short floral tubes.
Flowering time: Blooms appear recurrently from June to autumn. 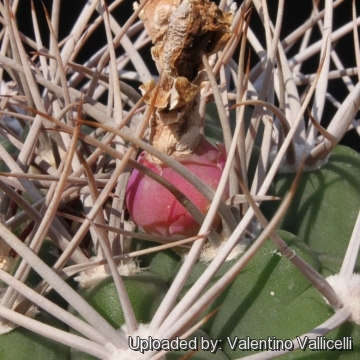 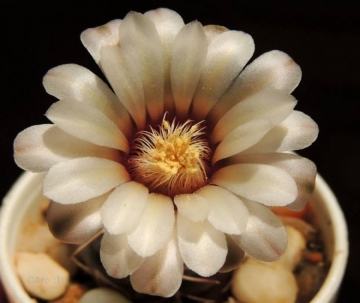 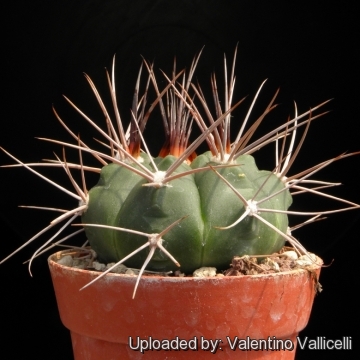 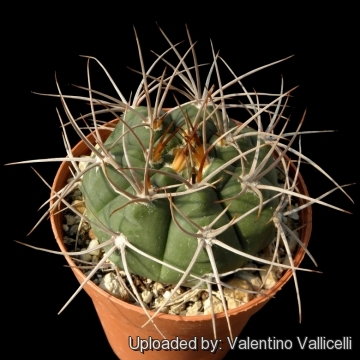 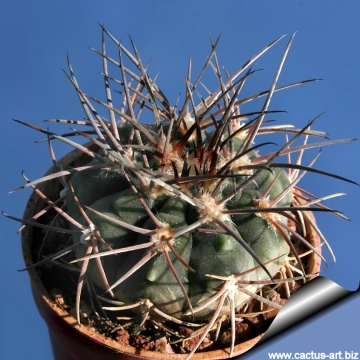 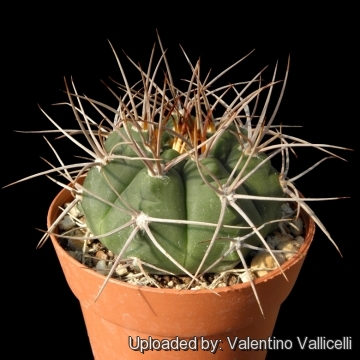 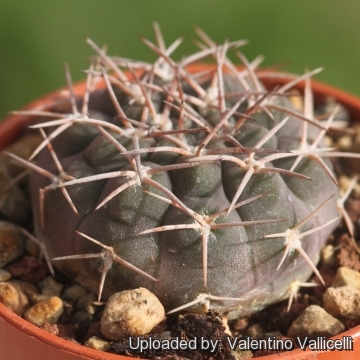 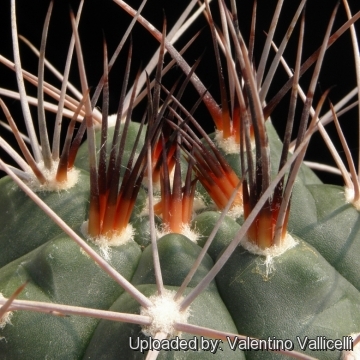 Cultivation and Propagation: Gymnocalycium hossei var. nidulans is a summer grower species that is easy to cultivate.
Growth rate: It is a relatively rapidly growing and easily flowering species that will make clumps given the best conditions.
Soils: It likes very porous standard cactus mix soil. Prefer a low pH compost, avoid substrata rich in limestone; otherwise growth will stop altogether.
Repotting: This plant needs plenty of space for its roots, repotting should be done every other year or when the it has outgrown its pot. Use pot with good drainage.
Watering: Needs moderate to copious waterings in summer, but do not overwater (Rot prone), keep dry in winter at a minimum temperature of 0°C.
Fertilization: Feed with a high potassium fertilizer in summer.
Hardiness: Reputedly resistant to frost if kept on the dry side prior to, and during, cold weather (hardy to -12 C ° C, or less for short periods), but for safe cultivation it is best to avoid freezing temperatures.
Exposition: The plant tolerates extremely bright situations but enjoys filtered sunlight or afternoon shade, inside it needs bright light, and some direct sun. Tends to bronze in strong light, which encourages flowering and heavy spine production, but is likely to suffer from sun scorch or stunted growth if over exposed to direct sunlight during the hottest part of the day in summer.
Uses: It is an excellent plant for container growing. It always looks good and stays small. It look fine in a cold greenhouse and frame or outdoor in a rockery.
Pests & diseases: It may be attractive to a variety of insects, but plants in good condition should be nearly pest-free, particularly if they are grown in a mineral potting-mix, with good exposure and ventilation. Nonetheless, there are several pests to watch for:
- Red spiders: Red spiders may be effectively rubbed up by watering the plants from above.
- Mealy bugs: Mealy bugs occasionally develop aerial into the new growth among the wool with disfiguring results, but the worst types develop underground on the roots and are invisible except by their effects.
- Scales: Scales are rarely a problem.
- Rot: This species is particularly easy and accommodating, seldom suffer of cryptogamic diseases. Rot it is only a minor problem with gymnocalyciums if the plants are watered and “aired” correctly. If they are not, fungicides won't help all that much.
Propagation: Division, direct sow after last frost. Seeds germinate in 7-14 days at 21-27° C in spring, remove gradually the glass cover as soon the plants will be well rooted (ca 1-2 weeks) and keep ventilated, no full sun for young plants! To make a cutting twist off a branch and permit it to dry out a couple of weeks, lay it on the soil and insert the stem end partially into the soil. Try to keep the cutting somewhat upright so that the roots are able to grow downward.