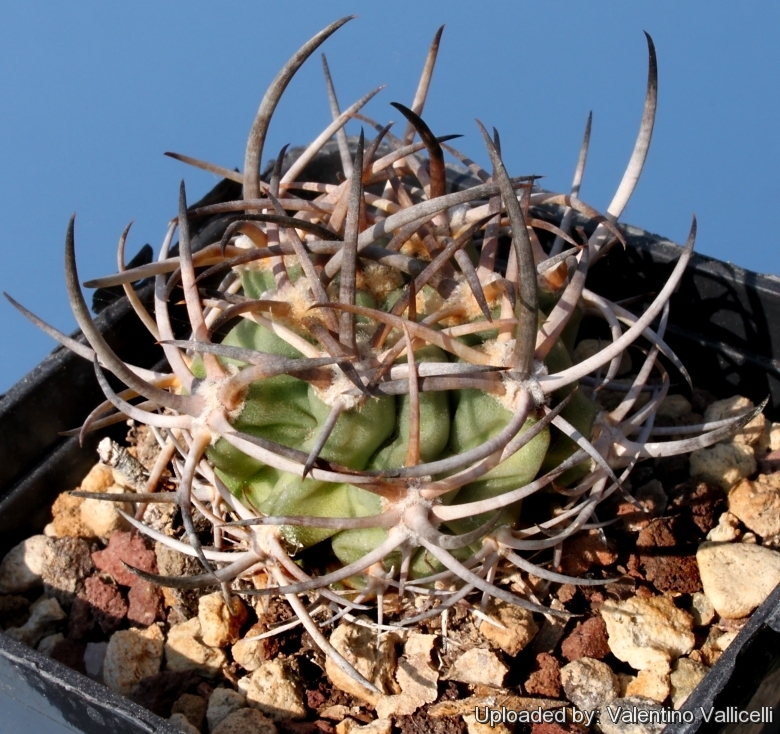 Description: Eriosyce sp. nova JS252 Illapel, 04 Coquimbo, Chile is a local or morphological form of the very variable Eriosyce aurata. It is quite similar to the standard variety but with very strong brown, dark bluish-pink or almost black spines. However, with the exclusion of the spines, it is quite similar to the latter and not easily separable by any important character from the other aurata. The spines take a grey-brown colouring with time. It is cold hardy.
Habit: It is a very large and very spiny barrel cactus with numerous ribs. This fascinating plant is known by Chileans under the name of "sandillon" and resembles in habit and fruit to some of the giant species of Echinocactus in Mexico.
Stem: Spherical with abundant white wool on top up to 50 cm in diameter. Adult specimens become columnar, reaching over 90 cm in height.
Ribs: Around 30-35 ribs
Spines: Very strong brown to dark bluish-pink or almost black. Juvenile specimens have 1 central spine and 8 radial, but the number increase as they get older and areoles can have over 20 spines on mature specimens.
Flowers: Red campanulate or funnel-shaped 5 cm long, from the apex of plant, with a white hairy floral tube. There might be over 50 flowers on a mature specimen (only mature specimens bloom). Ovary densely matted with matted wool.
Fruits: Oblong, becoming dry, dehiscing by a basal pore, very spiny above.
Seeds: Rather large, dull, black-pitted with a sub-basal hilum. 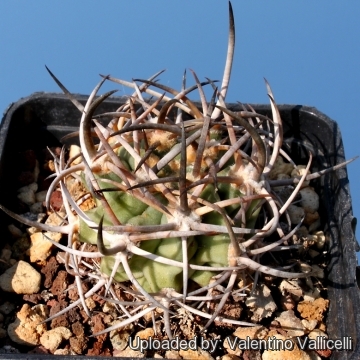