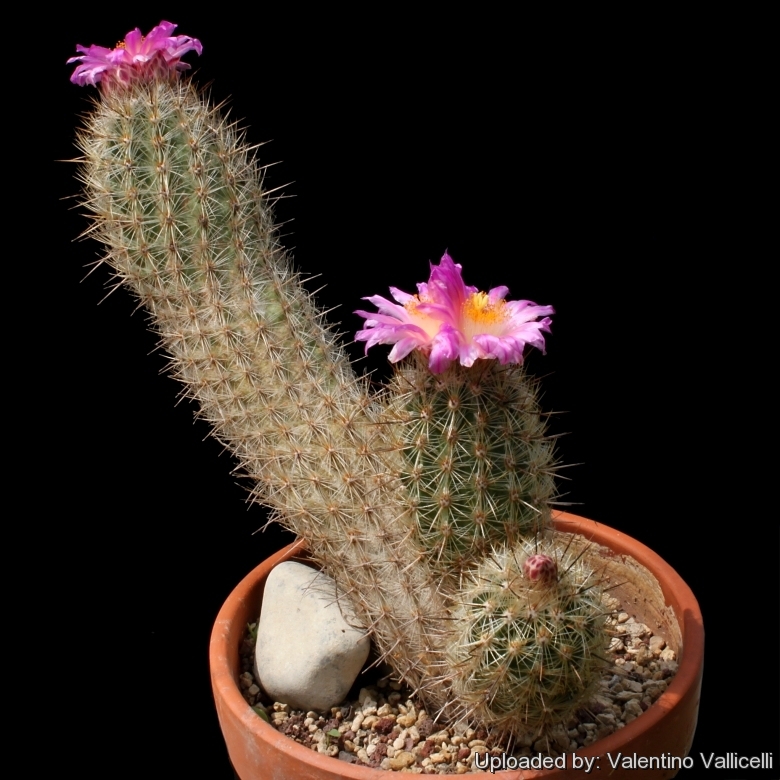 Thelocactus hastifer Photo by: Valentino Vallicelli
This is one of the rarest species of the genus not being represented too frequently in the collections. Even the young seedlings may be immediately distinguished from the other Thelocacti: from the very beginning their growth is elongate instead of globose.

Origin and Habitat: Mexico, occurring at about the southernmost limit of the genus in Querétaro near Mesa de León (between Cadereyta and Vista Hermosa (a small village at the edge of the barranca of the Rio Moctezuma). Thelocactus hastifer has a limited range of 400 km² in no more than four locations. It seems the population size is fairly small (< 250 mature individuals).
Habitat: It grows in the matorral xerofilo (shrubland) on fairly steep limestone hills at 1800-2200 metres elevation. The plants often collapse, or rather recline, under their own weight, coming horizontally out of cracks in large rocks, the growing point straining to keep upright. There is continuing decline in the number of individuals due to illegal collecting and there has been an ongoing decline in several subpopulations due to the construction of a dam and aqueduct system, where the road system installed to maintain the infrastructure has caused a major degradation of habitat and reduction in mature individuals. Because of its very restricted occurrence, it is considered an endangered species.

Description: Usually solitary, clustering only after many years, from the base. Even the young seedlings may be immediately distinguished from the other Thelocacti: from the very beginning their growth is elongate instead of globose.
Stem: Cylindrical cereoid, erect or decumbent, yellowish green, 10-40 cm tall, 2,5-5 cm in diameter
Ribs: Approx. 18 vertical or spiralling divided into rounded tubercles sometimes with or sometimes without extrafloral nectaries.
Spines: Central spines 4-5, 10-26 mm long, white to black, straight, acicular. Radial spines 20-25, 12-15 mm long, white, straight, acicular.
Flowers: 2,5-3 cm long, 35-75 mm wide, magenta, with paler throat. They appear in the spring.
Roots: Tuberose swollen.
Note: At the base the plant body has a very thin collar that cannot bear the weight of the stem, so eventually it grows lying on the ground. (it is a good hanging like Thelocactus)

Subspecies, varieties, forms and cultivars of plants belonging to the Thelocactus hastifer group 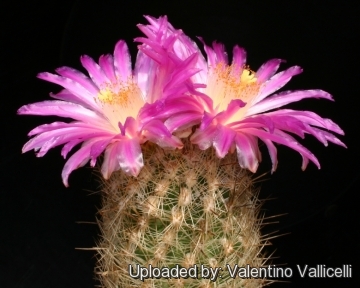 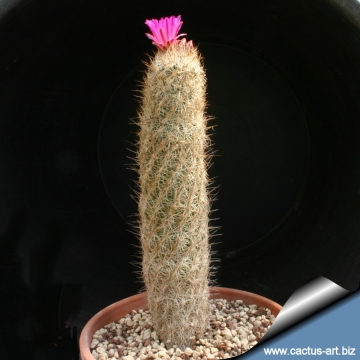 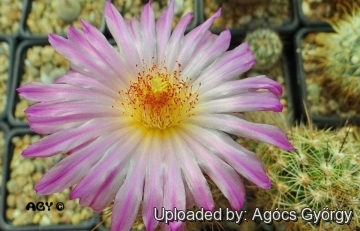 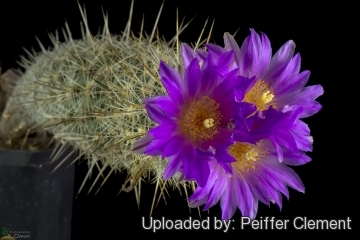 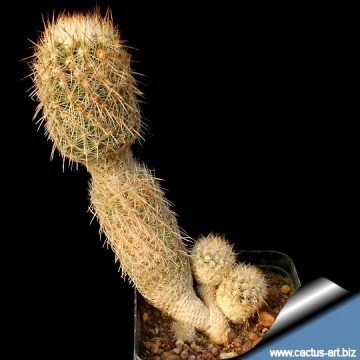 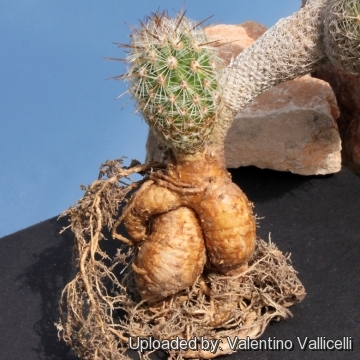 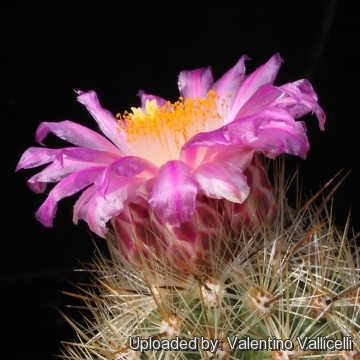 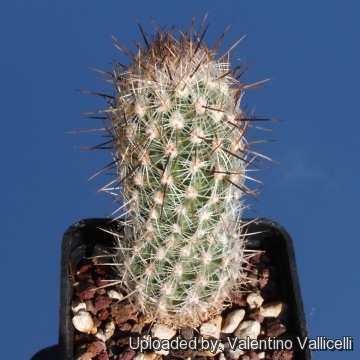 Cultivation and Propagation: Thelocactus hastifer is easy to grow, provided it is kept dry during autumn and winter.
Growth rate: Plants grow slowly but clusters freely in cultivation.
Potting medium: Use a cactus mix or add extra perlite or pumice to regular soil potting soil. A gritty, very free-draining compost is suitable, and clay pots help the plants to dry out between watering. For best results, use a deep pot.
Fertilization: Need a perfect fertilizer diet in summer. Use preferably a cacti and succulents fertilizer with high potassium content including all micro nutrients and trace elements or slow release fertilizer.
Watering Needs: Water normally in the growing season from March to October. No water should ever be allowed to stand around the roots. Keep almost completely dry in winter. The swollen caudex makes it very tolerant of under watering.
Hardiness: It is quite frost resistant if kept dry, hardy as low as -5° C. It can be grown outdoors in the summer months to benefit from direct exposure to light, and especially exposure to high summer temperatures. Recommended Temperature Zone: USDA 10-12.
Sun Exposure: It is essential to give full sun; otherwise they will become atypical. If grown in full sun, the new growth will flower profusely in spring and summer.
Rot: Rot is only a minor problem with thelocacti if the plants are watered and “aired” correctly. If they are not, fungicides won't help all that much. The plant turns immediately to mush when over watered, or watered out of season. Care must be given in watering, keeping them warm and wet while growing, and cooler and dry when dormant.
Reproduction: Seeds or cuttings. The seed should be planted in spring. Germination usually occurs within about one week to one month. Seed germinate at 15-21 °C.