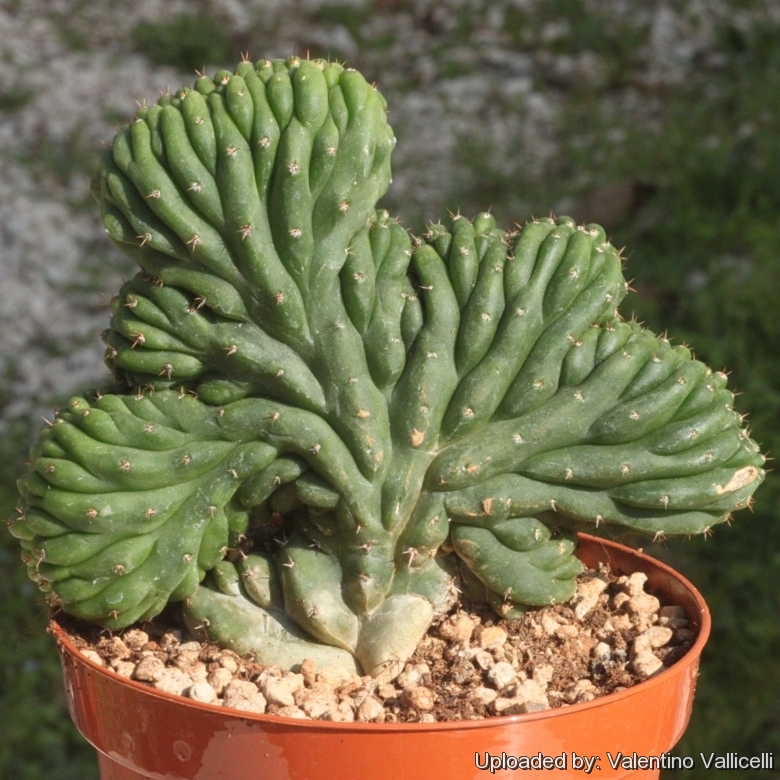 Origin and Habitat: Garden origin (Nursery produced cultivar). The wild species occurs over a considerable range from the mountains of Peru, Ecuador, Bolivia and northern Argentina.

Description: The typical San Pedro cactus (Trichocereus pachanoi) is a multi-stemmed “organ-pipe cactus” with light green stems (slightly glaucous when young, dark green in age) that that forms a small tree 3 to 6 meters tall by 1,8 m spread, with several branches, usually extending from the base
Crested form: The rare crested form can also get very big making a spectacular specimen.
Stems: Fan-shaped, pale to dark bluish green or green, forming with time imposing brain-like mounds to 1 metre in diameter and height.
Ribs: Broad at base, obtuse, rounded, with a deep horizontal depression above the areole.
Areoles: Whitish, close set.
Spines: Often wanting, when present 3 to 7, unequal only few millimetres long, dark yellow to light brown. Spines are located at the nodes which are spaced evenly (approximately 1-2 cm apart) along the ribs.
Flowers: Very large, white, night blooming and remaining open for the following day, fragrant, up to 22 cm in diameter.
Blooming time: July.
Fruit: Oblong, dark-green, 5-6 cm long, 3 cm in diameter. 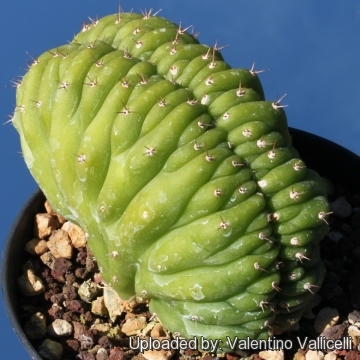 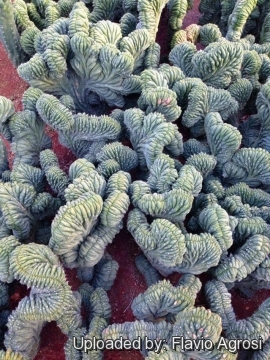 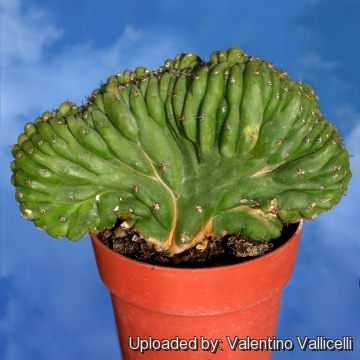 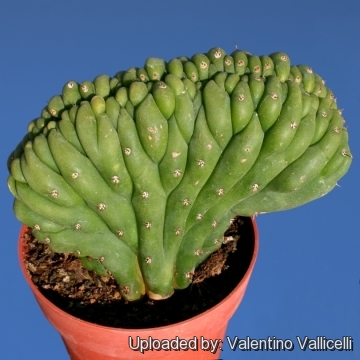 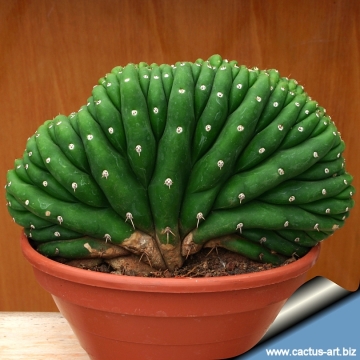 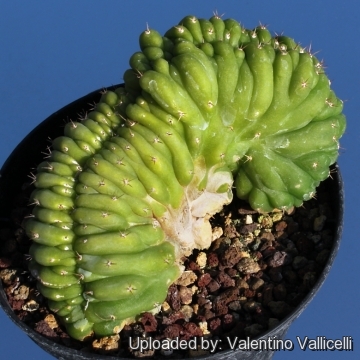 - Crest or "cristate" San Pedros are quick grower and special looking plants. Like brains, the growing point is generally ridge-like instead of circular. The only way to multiply this cactus is by dividing the main crest into smaller pieces that can be rooted. Photo by: Valentino Vallicelli 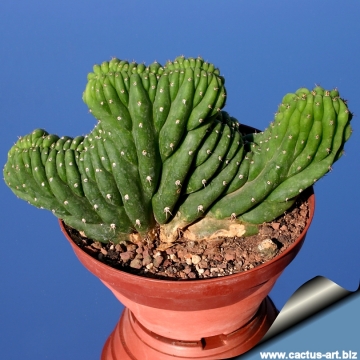 Cultivation and Propagation: Trichocereus pachanoi is very easy to grow and cold hardy as low as -12°C (or less). It needs a fertile, well drained soil mix. Water the plants well and allow them to dry before watering again. This species seems to do better with a little more water than most cacti. In fact, its cultivation requirements are really more like 'normal' plants than most other cacti. During the growing season fertilize them monthly with a balanced fertilizer
Sun Exposure: Outside full sun, but during hot summers the cactus are subject to sun burning, so grow them in light shade. Inside they need bright light, and some direct sun. During winter months, put them in a cool luminous place and encourage them to enter winter dormancy by withholding water and fertiliser over the winter, as they will etiolate, or become thin, due to lower levels of light. They are susceptible to fungal diseases if over-watered, but are not nearly as sensitive as many other cacti, especially in warm weather. They tend characteristically towards black rotted spots unless watering is moderate and only in hot weather. If kept damp through cold periods, they will invariably suffer.
Trichocereus pachanoi produces good amounts of growth each year if kept well fed and watered throughout the warmest months, particularly if it has been acclimatised to accept full sun.
Propagation: The way to multiply this cactus is by dividing the main crest in smaller pieces that can be rooted. It can also be grafted.