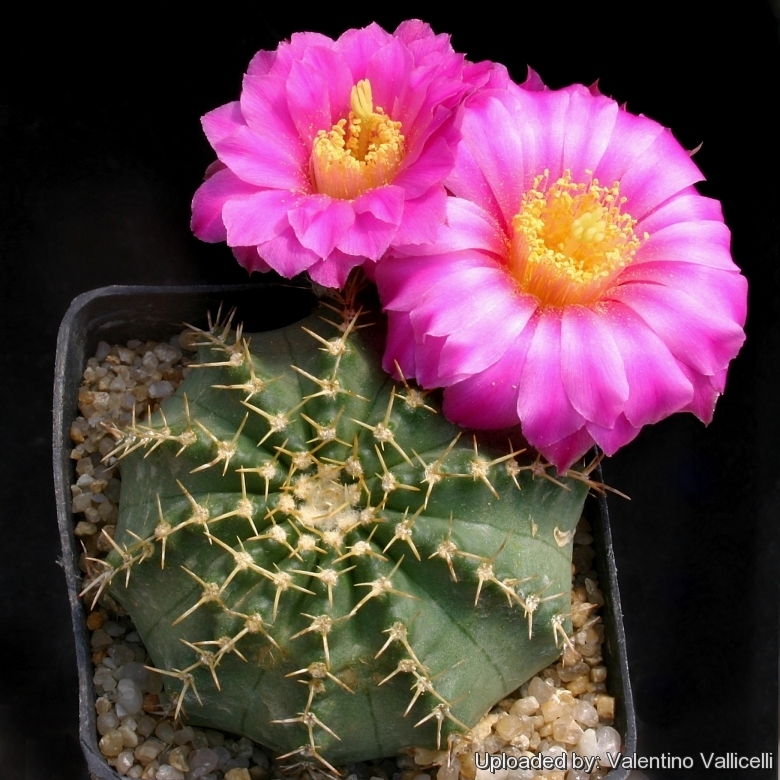 Origin and Habitat: Mexico (northern Oaxaca, Puebla, Hidalgo, San Luis Potosi, and Queretaro)
Ecology: It is a geophyte cactus with a swollen underground storage taproot, in the wild tends to disappear completely in the ground in time of drought.

Description: Solitary or slowly clumping
Stems: Flat globular up to 6 cm (but cultivated plants are frequently higher), 5-7cm in diameter, bluish green when young;
Ribs: 9 to 13;
Areoles: 5 to7 mm inch apart; 3 to 7 pale yellowish spines.
Roots: It has a strong taproot.
Flowers: Abundant pink or purple/red (rarely white) flowers, up to 6 cm in diameter.
Remarks: Many of the plants usually known in cultivation as "Echinocereus amoenus" are instead a form of Echinocereus weinbergii.

Subspecies, varieties, forms and cultivars of plants belonging to the Echinocereus pulchellus group 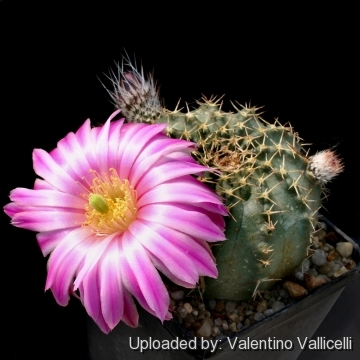 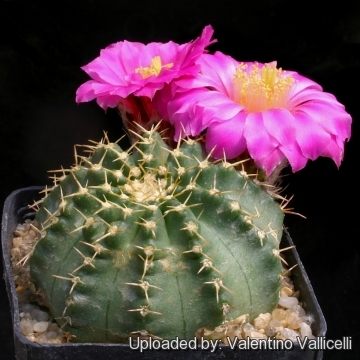 Cultivation and Propagation: It is relatively easy to grow on its own roots.
Growth rate: It is a relatively slow growing and easily flowering species that will make clumps given the best conditions.
Soils: It likes very porous standard cactus mix soil.
Repotting: It has a strong tap root and should have a deep pot to accommodate it. Use pot with good drainage.
Watering: Water carefully, too much water will make it rot, keep dry in winter.
Fertilization: Feed with a high potassium fertilizer in summer.
Hardiness: Keep dry at minimum temperature of 5° C in winter although will tolerate brief periods to -10 degrees. Sun Exposure: Full sun to light shade. However warmth throughout the year will increase the grower's success (5-12°C during rest season).
Exposition: Outside full sun to light shade or afternoon shade, inside it needs bright light, and some direct sun. Subject to sunburn if exposed to direct sun for too long. Tends to bronze in strong light, which encourages flowering.
Uses: It is an excellent plant for container growing. It always looks good and stays small. It look fine in a cold greenhouse and frame or outdoor in a rockery.
Pests & diseases: It may be attractive to a variety of insects, but plants in good condition should be nearly pest-free, particularly if they are grown in a mineral potting-mix, with good exposure and ventilation. Nonetheless, there are several pests to watch for:
- Red spiders: Red spiders may be effectively rubbed up by watering the plants from above.
- Mealy bugs: Mealy bugs occasionally develop aerial into the new growth among the wool with disfiguring results, but the worst types develop underground on the roots and are invisible except by their effects.
- Scales: Scales are rarely a problem.
- Rot: Rot is only a minor problem with cacti if the plants are watered and “aired” correctly. If they are not, fungicides won't help all that much.
Propagation: It grow easily from seed or cutting (if available).