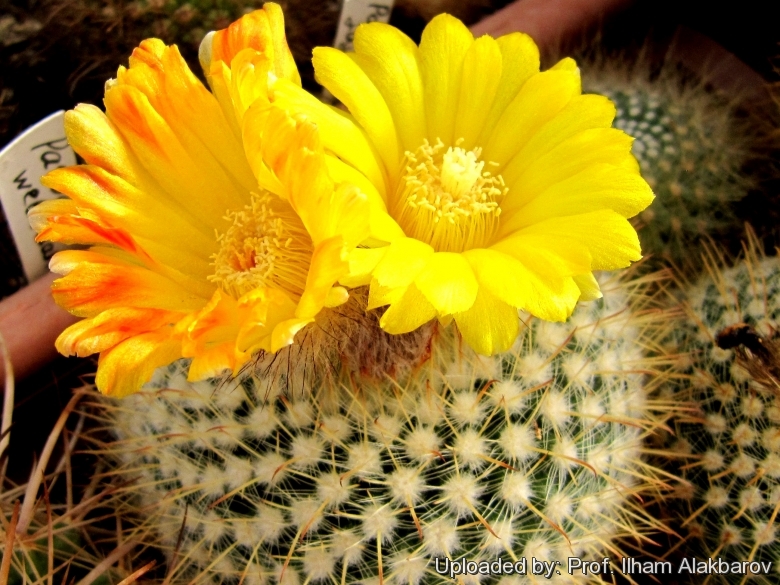 Origin and Habitat: Northern Argentina ( Salta)
Altitude: 1600-2500 metres above sea level.
Habitat and Ecology: It is locally abundant and grows on rocky soils together with Echinopsis silvestrii.

Description: Parodia microsperma var. mutabilis (Parodia mutabilis) is only a variant of the extremely variable Parodia microsperma. Characteristic of this frequently offered cactus are its strong, yellow spination and its yellow flowers.
Similar varieties: It is very similar (if not the same) with Parodia aureispina and Parodia aurihamata, and the three plants are not readily distinguishable, if not for the geographical provenance.
Habit: It is a compact small to medium-sized, perennial cactus usually solitary, but can form small clusters.
Stem: Spherical when young, but with age it often develops a short cylindrical shape, light green or bluish-green up to (5-)6-7(-10) cm in diameter and 5-20 cm tall (or more).
Ribs: 13-21 more or less d ivided into spiralled, conical tubercles 4-5 mm in diameter 3 mm long.
Areoles: 1,5 mm in diameter with white-yellowish tomentum that fade away as they age.
Radial spines: 20-50 thin, or more, very fine, white..
Central spines: 3-4, short, mostly yellow, but also reddish or brownish of which the lowermost more long hooked at apex and strong 4-10 mm long.
Flowers: Bright yellow, infundibuliform on the plant apex 2,5-3,5 mm long, 40-50 mm in diameter. External tepals spatulate or lanceolate. Pericarpel and tube with wool and bristles throughout. The filaments bear cream-yellowish anthers. Stile white-yellowish bearing a 12 lobed stigma.
Blooming season: Produces several flowers simultaneously in early summer (while on Parodia maassii they usually appear one by one), the flowers remain open for about three days.
Fruit: Nearly spherical to ovoidal about 4-5 mm in diameter, with basal dehiscence.
Seeds: Very small, to only 0,4-0,5 mm long including the large white caruncle, seed-coat smooth, brown and shining. 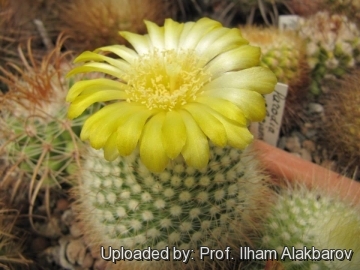 Cultivation and Propagation: Parodia mutabilis is relatively easy to grow on its own roots and quite resistant to cultivation. The only things that can kill this plant are cold and overwatering. Nevertheless, it is appropriate to provide adequate growing conditions in order to obtain compact plant with many flowers.
Soil: Use a an open and free draining mineral compost with little organic matter (peat, humus) that allows therefore roots to breath (as it is rot prone). Outdoors a well-draining rocky or sandy soil is ideal.
Pots: It needs a relatively shallow pot to accommodate its fibrous roots and provide a very good drainage. It may stay in the same pot for many years.
Watering: Needs regular water in summer. Keep rather dry in winter, tends to lose its roots in winter.
Fertilization: Feed with a high potassium fertilizer in summer during the growing season diluted to one-fourth potency and mix into the watering can for application.
Hardiness: Keep dry at 5- 10° C in winter, but can tolerate sporadic light frost if kept on the dry side prior to, and during, cold weather.
Exposition: The plant tolerates very bright situations, if kept too dark they may become overly lush and greener and could be prone to rotting due to over watering. Strong light encourages flowering and heavy wool and spine production, but is likely to suffer from sun scorch or stunted growth if over exposed to direct sunlight during the hottest part of the day in summer.
Pests & diseases: It may be attractive to a variety of insects, but plants in good condition should be nearly pest-free, particularly if they are grown in a mineral potting-mix, with good exposure and ventilation. Nonetheless, watch carefully for any significant decline in health. This may signal a pest problem that should be dealt with quickly in order to prevent scarring, stunting and even death.
- Red spiders: Red spiders may be effectively rubbed up by watering or misting the plants from above.
- Mealy bugs: Mealy bugs occasionally develop aerial into the new growth among the leaves with disfiguring results, but the worst types develop underground on the roots and are invisible except by their effects. Eliminate mealybug infestations by dabbing the critters with cotton swabs dipped in alcohol or by soaking the succulent's roots in a systemic insecticide.
- Scales: Scales are rarely a problem.
- Rot: This species is particularly easy and accommodating, seldom suffer of cryptogamic diseases. Rot it is only a minor problem with cacti if the plants are watered and “aired” correctly. If they are not, fungicides won't help all that much.
Propagation: By Seeds. The seed of this plant are extremely small and must be sown on the surface of the germination substrate (not buried!!) But the seedlings after germination are so minuscule and delicate that it is quite problematic to keep them alive. So for this species it is usually used the baggy germination technique (in a sterilized pot hermetically closed in a plastic sachet)