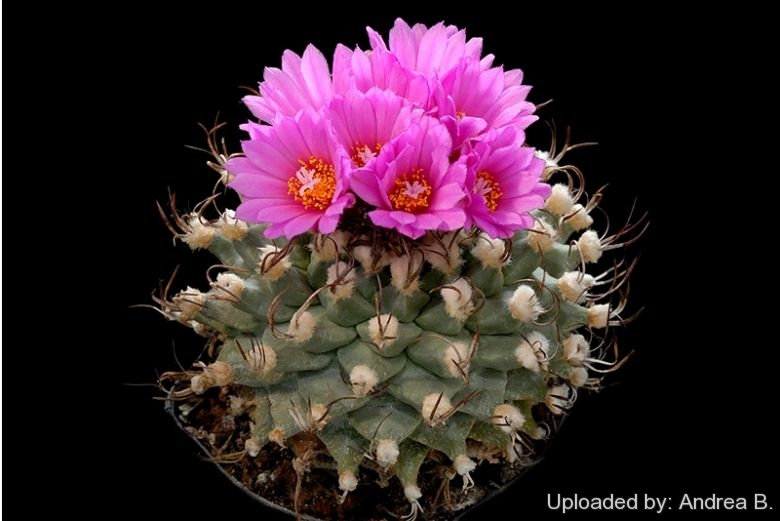 Origin and Habitat: Rocky hills near Xichu, Guanajuato (Mexico, Northern America), area of occupancy km2. Number of mature individuals less than 5000.
Altitude range: This species grows at about 1,900 metres above sea level.
Habitat and Ecology: This cactus grows in semi-desert scrub on steep rocky calcareous slopes. Turbinicarpus alonsoi is considered to be Critically Endangered due to its occurrence in a single location with an area of less than 10 km², and because it is continuing to rapidly decline as a result of illegal collecting.

Description: Turbinicarpus alonsoi is a small geophytic solitary cactus with a large tap-root, and only the apical part of the stem exposed at soil level.
Stem: Flattened, spherical, mostly underground, 6-7(-9) cm in diameter, up to 11 cm long.
Ribs: Arranged in tubercles, these are 15 mm long and 13 mm wide at the base, slightly angular, upper side keeled, however concave at the base, clearly keeled on the underside, arranged in spirals, opposite contact parastichy with a number relationship of 5:8 or 8:13, from grey-green to glaucous in colour.
Areoles: At first with reddish brown wool, later becoming grey.
Spines: 3-5, up to 20 mm long, flattened, cardboard-like, grey with dark tip, irregularly bent inwards, frequently weathered, not piercing.
Flowers: Cherry red to pink-magenta, with more intensely coloured mid-stripe 20-30 mm in diameter, 25-35 mm long, standing above the tubercles by about 10 mm, with approximately 22 inner (teptals), scale like perianth segments, more intensely red with pale edge. Pistil 15 mm long, white, standing above the stamens by around 2-4 mm, with 6 white, 1.5-2 (-2.5) mm-long stigma lobes.
Blooming season: From March to October, mainly between April and June
Fruit: 10 mm long, 5 mm in diameter, smooth, reddish-dark purple, brighter at the base, opening with 1-2 longitudinal tears.
Seeds: 1 mm long, 0.75 mm high.

Subspecies, varieties, forms and cultivars of plants belonging to the Turbinicarpus alonsoi group 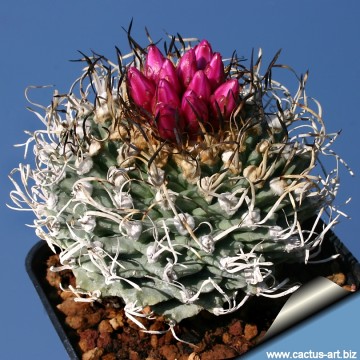 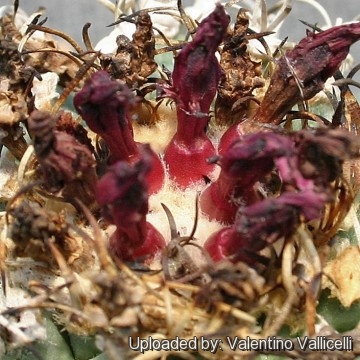 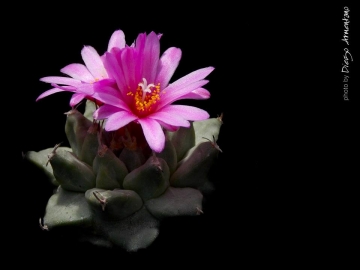 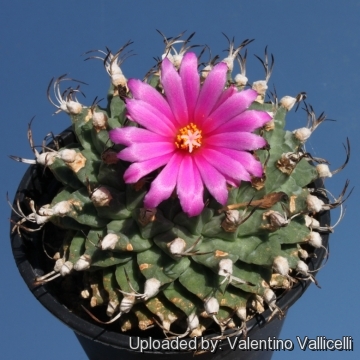 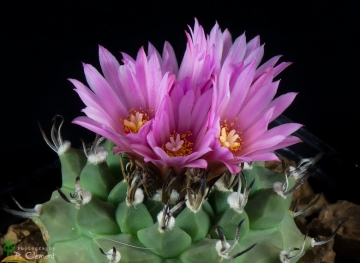 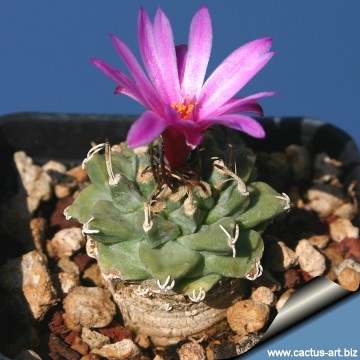 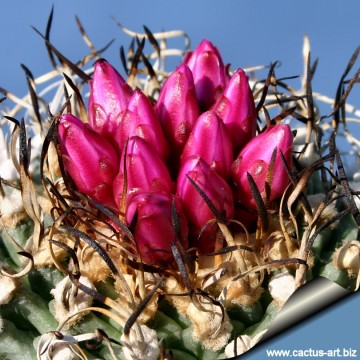 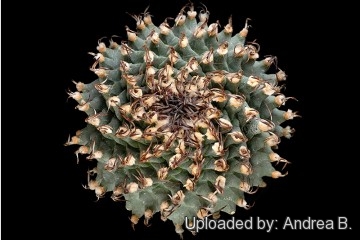 Cultivation and Propagation: Turbinicarpus alonsoi is not particularly difficult on own roots, but very slow growing.
Soils: It likes very porous standard neutral or slightly alkaline cactus mix soil.
Repotting: Use pot with good drainage.
Watering: It should be watered during the growing season, but waterings should be rather infrequent to keep the plant compact, and avoid it will become excessively elongated and unnatural in appearance. Keep dry in winter or when night temperatures remain below 10° C. Water it less than average if in bigger pots, small pots preferred. Furthermore it has a tap root, and watering it properly is often difficult, because it tends to crack open or rot if over-watered. Careful watering away from the body of the plant will allow the areoles to keep their wool.
Fertilization: Feed with a high potassium fertilizer in summer.
Hardiness: It is hardy to -4°C for a short period if kept on the dry side prior to, and during, cold weather. However warmth throughout the year will increase the grower's success (8-12°C during rest season). Assure a good ventilation.
Exposition: Outside bright, hot conditions or afternoon shade, inside it needs bright light, and some direct sun. Strong light keep the plant compact and low and encourages flowering and heavy wool and spine production.
Uses: It is an excellent plant for container growing. It always looks good and stays small.
Pests & diseases: It may be attractive to a variety of insects, but plants in good condition should be nearly pest-free, particularly if they are grown in a mineral potting-mix, with good exposure and ventilation. Nonetheless, there are several pests to watch for:
- Red spiders: Red spiders may be effectively rubbed up by watering the plants from above.
- Mealy bugs: Mealy bugs occasionally develop aerial into the new growth among the wool with disfiguring results, but the worst types develop underground on the roots and are invisible except by their effects.
- Scales: Scales are rarely a problem.
- Rot: Rot is only a minor problem with cacti if the plants are watered and “aired” correctly. If they are not, fungicides won't help all that much.
Propagation: From seed, since the plant rarely produces plantlets, or grafted. Seeds germinate in 7-14 days at 21-27° C in spring, remove the glass cover gradually as the plants develops and keep ventilated, no full sun for young plants!

by Valentino Vallicelli
There are a total of 16 Photos.
Click here to view them all!
Cite this page: "Turbinicarpus alonsoi" Text available under a CC-BY-SA Creative Commons Attribution License. www.llifle.com 14 Nov. 2005. 02 Jul 2022. </Encyclopedia/CACTI/Family/Cactaceae/11705/Turbinicarpus_alonsoi>