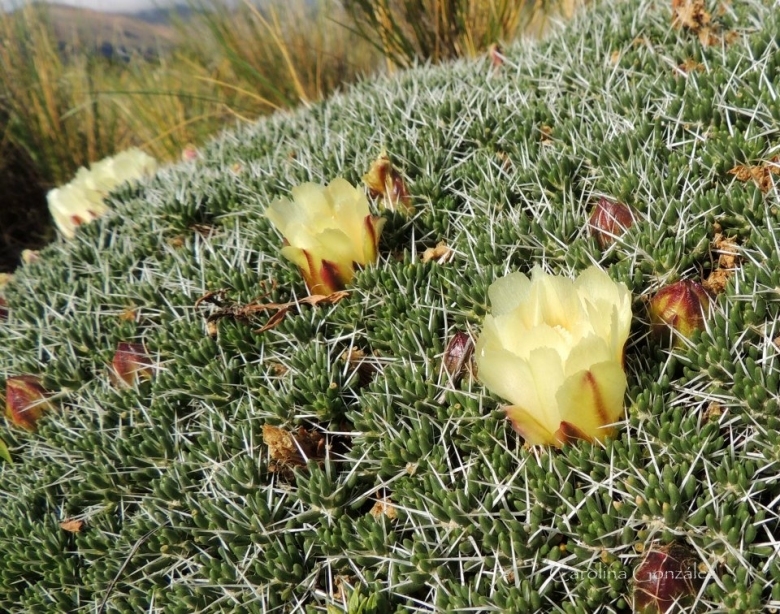 Maihuenia poeppigii Photo by: Carolina González
Blooming habit, Neuquén province, Argentina. Maihuenia poeppigii is a beautiful and unusual cactus from Chile and Argentina that forms dense cushions up to one meter in diameter. It is a surprisingly moisture and frost-tolerant cactus. This species can also be grown anchored without soil on a roof (like for the sempervivums).

Origin and Habitat: Southern Chile (Bío-Bío, La Araucania, Maule, O'Higgins), but also crosses the border into western Argentina in Neuquén. Maihuenia poeppigii is widespread and locally abundant in the majority of its range, and in the majority of its range there are no threats.
Altitude range: Approximately from 500 to 2,200 metres above sea level.
Habitat: This species grows at very high altitudes in extremely xeric regions of Patagonia mainly in volcanic ashfields in subalpine forests of Araucaria araucana, thin grassland and stony plateaux. It also grows in relatively humid zones in the border of the subantarctic province. In Chile, this species grows in volcanic soils. It is very resistant to low temperatures, being covered with snow in winter on its native hills.

Description: Maihuenia poeppigii is a shrubby, much branched, prostrate, succulent plant originally described as an Opuntia, but there are no glochids, and differences in seed and other microscopic features. It is hardy cactus that forms large mats of cylindrical stems with small, succulent leaves and white spines, often consisting of hundreds of individual segments. It is small in size, and can reach 10-15(-20) cm in height, but it can grow up to 2 meter in diameter. This is a common adaptation to cold, windy alpine habitats. The flowers are very showy, large, satiny and lemon-yellow in colour.
Derivation of specific name: Its specific epithet poepigii commemorates Eduard Pöppig, a 19th-century German naturalist who explored South America.
Stems (joints): Spiny to the bases, oval, club-shaped or cylindrical, branching from near
tips, 2-6 cm long or more, 8-20 mm in diameter without knoblike spur shoots..
Roots: Taproots fleshy, 40-80 cm long.
Areoles: Small whitish.
Leaves: The foliage is persistent, formed by a dense mass of dark green, cylindrical and almost needle-like leaves, (1-)4 to 6(-10) mm long, , 1-2 mm in diameter, green, straight to slightly curved with acute tips. It keeps its leaves in the winter.
Spines: 3 from each areole, the 2 laterals very short (occasionally only one or absent), the central one round to flattened above, rigid, 15 to 25 mm long.
Flowers: terminal, remarkably beautiful, large, soft, satiny, lemon-yellow.
Blooming season: It flowers in late spring. .
Fruits: Oblong, obovate to club shaped 5-6 cm long. The fruits of this species are edible.

Subspecies, varieties, forms and cultivars of plants belonging to the Maihuenia poeppigii group

Notes: Closest relatives: Maihuenias are very strange and unusual cacti that in earlier literature were supposed to be related to Opuntia, Pereskia and Pereskiopsis, but DNA sequencing of this group has determined that Maihuenia is not related to any of those. 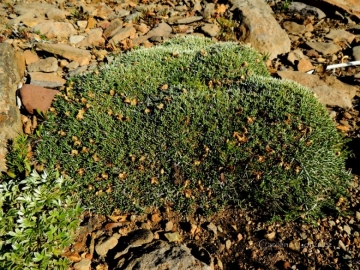 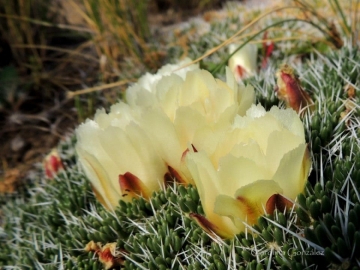 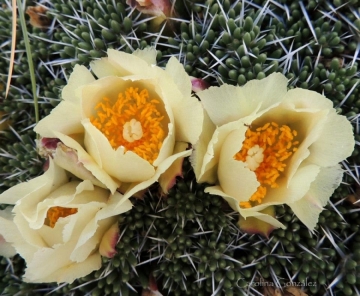 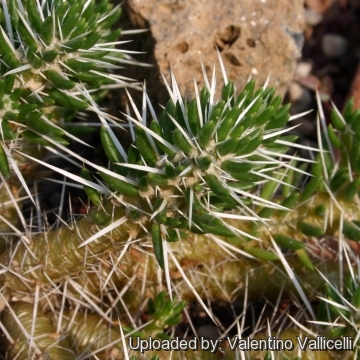 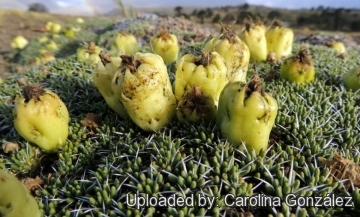 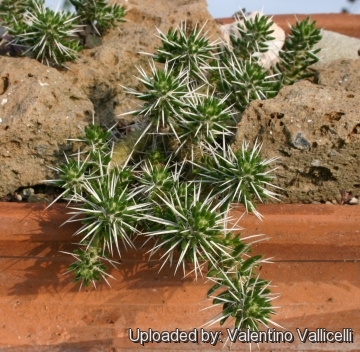 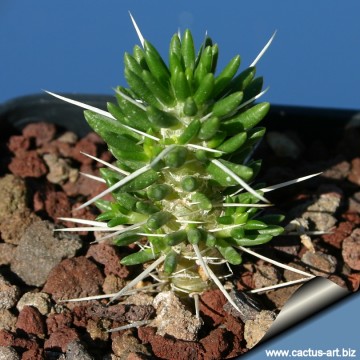 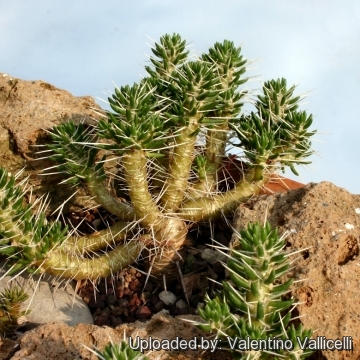 Cultivation and Propagation: Maihuenia poeppigii is an easy-to-grow plant, it is a surprisingly moisture-tolerant cactus, is said also to be reliably cold-hardy in central Europe and England. Of the two species Maihuenia poeppegii is the hardiest species and it can survive outside in the garden in the sunny rockery on a sheltered place, but only if it's protected with a sheet of glass during the wintertime. It is also very good for a large pot which can be stored inside an unheated greenhouse or on a balcony, somewhat protected from moisture during the winter, but is probably safest to grow it in the Alpine House or in a raised bed inside an unheated greenhouse all year around, with lots of ventilation.. It doesn't fear cold weather and it bears very harsh frost, and temperatures of around -10° (or less down to -20° if dry) degrees Celsius did not harm these plants at all. They should not be kept hot in summer as they are from high elevations. during the beautiful season it’s good to enrich the soil of our succulent plants; using a fertilizer rich in potassium and phosphorous, but poor in nitrogen, because this chemical element doesn’t help the development of succulent plants, making them too soft and full of water. For a balanced development, it is best to position the the Maihuenia poeppigii in a place where it is exposed to at least a few hours of direct sunlight. Water these plants only from time to time if grown outdoors, but it should be watered abundantly if grown in a pot or in the greenhouse, during the summer. The spring weather, with a high temperature swing between the day and night hours, and pretty frequent rains, can favour the development of fungus diseases, which should be treated pre-emptively with a systemic fungicide. We suggest repotting every 2-3 years.
This species can also be grown anchored without soil on a roof (like for the sempervivums).
Use: The fruits of this species are edible.

by Carolina González
There are a total of 17 Photos.
Click here to view them all!
Cite this page: "Maihuenia poeppigii" Text available under a CC-BY-SA Creative Commons Attribution License. www.llifle.com 14 Nov. 2005. 04 Jul 2022. </Encyclopedia/CACTI/Family/Cactaceae/11620/Maihuenia_poeppigii>