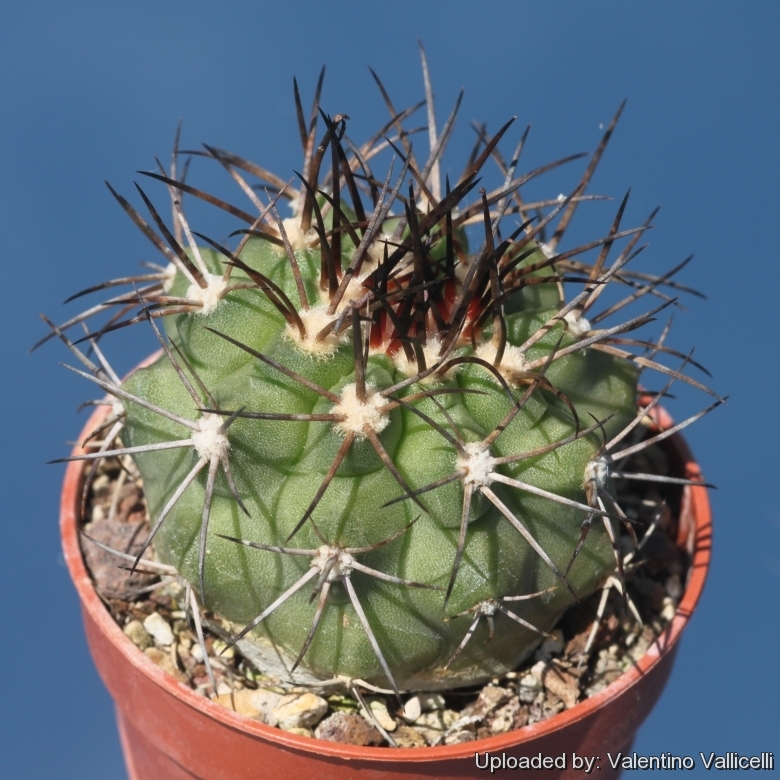 Description: Copiapoa cupreata is a controversial name based on a poorly described Chilean plant of Poselger. The name cupreata is used by some authors to indicate a local form of Copiapoa echinoides, while other authors are inclined to believe that “cupreata” is a synonym of Copiapoa fiedleriana. The following description is based on Walther Haage “Kakteen von A bis Z”:
Derivation: Latin Cupreata, copper coloured.
Stem: Spherical, dark brown.
Ribs: Divided into rhombic tubercles 5 mm tall with rounded edges.
Areoles: Sunken on the tubercles, grey.
Spines: About 6, 1-2 cm long, the upper the shorter, curved brown-black towards the tip and, yellow at the base.
Note: The so called “Copiapoa cupreata” KK1382 Vallenar, Chile 800m, (distributed by Karel Kníže) may be eventually described under a different name.

Subspecies, varieties, forms and cultivars of plants belonging to the Copiapoa echinoides group

Cultivation and Propagation: Watering Needs: The location has to be warm and bright, and it has to be in direct sun. Otherwise the bodies tend to elongate in cultivation, but they should be protected from excessive heat and sun in summer. In the spring and late summer, water moderately. Between these times there are dry rest periods. In the winter keep the plant absolutely dry. The roots need a lot of room, so make sure that the pot is large enough. Use regular cacti soil with very good drainage.
Propagation: Seeds (offsets rarely), Grafting is often used to speed growth rate and to create a back-up to plants in collection.