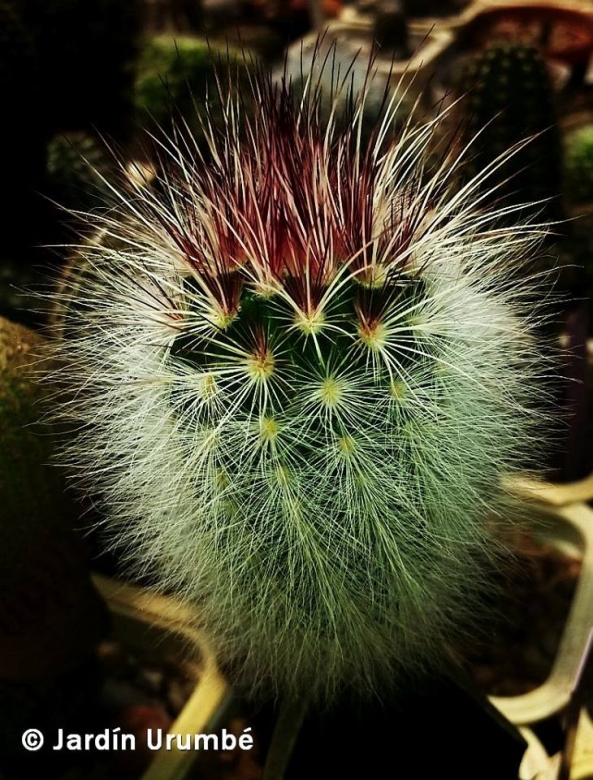 Description: Echinocereus viridiflorus var. canus is a remarkable white-spined variety closely related to Echinocereus viridiflorus subs. chloranthus. It is one of the few green-flowered cacti, and usually produces solitary stems covered with mostly white spines and its shaggy appearance resulting from spreading central spines. The juvenile stage, with long, white, hair-like spines in horizontal bands around the stem, is considered characteristic. However, two other Texas taxa also treated as a synonym of Echinocereus viridiflorus subs. chloranthus (Echinocereus milleri and Echinocereus viridiflorus var. neocapillus) have hairy juvenile forms. E. milleri has fewer spines (8-24 radial spines and 2-4 central spines). E. viridiflorus var. neocapillus is distinguished from var. chloranthus for having 15-23 radial spines. In var. canus there are more spines per areole than in any other variety and it lacks the yellow colour-form found in populations of var. neocapillus. In var. canus there are 8-15, slender, flexible, very fragile central spines spreading in all directions and 30-48 very slender radial spines, pure white and mostly appressed to the stem. The hairy seedlings are similar to those of var. neocapillus, but possibly the hairlike white spines are longer.
Derivation of specific name: The varietal epithet, “canus”, is a reference to the whitish aspect of the plants, after the Latin canus, "grayish-white".
Stems: Erect, ovoid to cylindrical stems, 6-15 cm long and 3-6 cm in diameter partially obscured by spines.
Ribs: 14-16.
Areoles: Oval 2.5-3.5 mm long.
Central spines: (8-)9-13(-15), slender, flexible, very fragile, 1.7-2.5 cm long, with a slightly bulbous bases 0.5-1 mm in diameter, and spreading in all directions usually interlocking with those of adjacent areoles. They are pure white white, or one or more central spines in each areole may be reddish (usually only at the tip), in upper and apical and younger areoles.
Radial spines: 30-48 very slender, appressed to the stem, pure white, and 5-8 mm long.
Hairs: Seedlings of var. canus less than 1-3 cm tall produce only flexible, hairlike white spines, these 0.5-1 cm or more long. The hairs are straight, wavy, or curved, and number about 40 per areole. They persist for several years as a dense "skirt" (1-2 cm wide) of white hairs on the lower portion of the stem. The hairlike spines become grey with age until the plants are 3-8 cm high. White and red normal spines are first produced in the apical areoles when juvenile stems are 1-3 cm long.
Flowers: Lateral on the stems, light green to bright golden-green, perhaps more nearly pure green than those of var. viridiflorus itself. The flowers are 2-3.4 cm or more long. The first-day flowers usually are funnelform, but in succeeding days usually they open wider. The flowers often open as widely as those of Echinocereus viridiflorus, Echinocereus viridiflorus subs. correllii, and Echinocereus davisii. The inner perianth segments are 1.3-2 cm long, 3-5 mm across. The filaments are greenish white 5-8 mm long, and the pale yellow anthers are ca. 5 mm long. The style is slender, 11-17 mm long, with usually 7-8 dark green stigma lobes. The nectar chamber is ca. 1.5-2 mm deep. The flower have a pleasant lemony fragrance.
Blooming season. These plants are expected to bloom during spring, from early March through most of April, sometimes into May, the flowers close at night and reopen for 3-4 days.
Fruits: Greenovoid to oblong, splitting open longitudinally on at least one side and quickly drying, obscured by slender white spines, 18-20 or more in each areole.
Seeds. Black nearly pear shaped, 1-1.3 mm long, and finely papillate except at the truncate bases.
Chromosome number: 2n= 22.
Similar species: Echinocereus viridiflorus var. canus bears slight resemblance to both Coryphantha sneedii var. albicolumnaria and Mammillaria pottsii, both of which occur in the same area, and to the whitest-spined individual plants of Echinocereus dasyacanthus, however they would never be confused when in flower. Without the hairy seedlings, var. canus could be mistaken for the plants of Echinocereus russanthus subs. weedinii.

Cultivation and Propagation: In culture it is without problems and regularly shows its small greenish flowers if we provide an adequate winter rest period. They are re small plants with scented flowers that are better close to nose level. Displaying your cacti on shelves has the added benefit of keeping them off the ground and away from potential rodent or snail damage.
Soil: Use mineral well-permeable substratum with little organic matter (peat, humus).
Repotting: Repotting every 2-3 years. It will need a pot with sufficient depth to allow the tap root. As it is especially prone to rot under-pot in a smaller container filled with very porous compost. Use pot with good drainage.
Watering: Water sparingly from March till October, and keep perfectly dry in winter, at temperatures from 5 to 15 degrees centigrade. In the rest period no high atmospheric humidity!!Care must be taken with watering as they tends to become swollen and untidy in growth habit if given too much water and shade.
Exposition: Outside bright sun, filtered sunlight or afternoon shade, inside it needs bright light, and some direct sun. Subject to sunburn if exposed to direct sun for too long. Tends to bronze in strong light, which encourages flowering and heavy spine production.
Hardiness: Keep drier and cool in winter. Very cold resistant hardy to -10° C or less for short periods of time.
Fertilization: During the growing season enrich the soil using a fertilizer rich in potassium and phosphorous, but poor in nitrogen, because this chemical element doesn’t help the development of succulent plants, making them too soft and full of water.
Pests & diseases: It may be attractive to a variety of insects, but plants in good condition should be nearly pest-free, particularly if they are grown in a mineral potting-mix, with good exposure and ventilation. Nonetheless, there are several pests to watch for:
- Red spiders: Sensitive to red spider mite. Overhead watering is helpful in controlling mites.
- Mealy bugs: Occasionally mealy bugs they develop aerial into the new growth among the wool with disfiguring results, but the worst types develop underground on the roots and are invisible except by their effects.
- Scales: Scales are rarely a problem.
- Rot: Rot it is only a minor problem with cacti if the plants are watered and “aired” correctly. If they are not, fungicides won't help all that much.
Propagation: Seeds or cutting (if available). Seeds germinate in 7-14 days at 21-27° C in spring, remove the glass cover gradually as the plants develops and keep ventilated, no full sun for young plants! The seedlings should not be disturbed until they are well rooted, after which they can be planted separately in small pots.