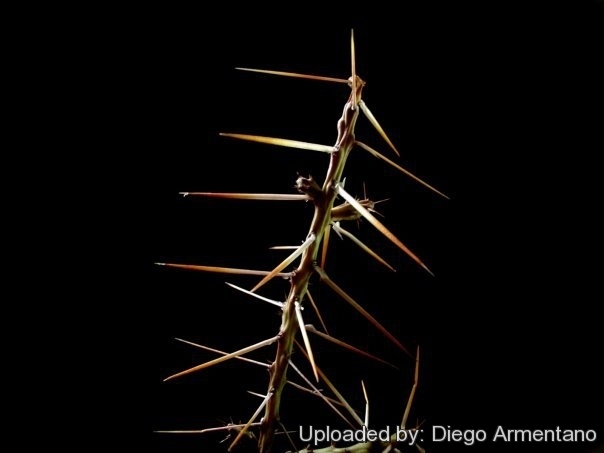 Origin and Habitat: Cylindropuntia leptocaulis is widely distributed, occurring in the Mexican states of Aguascalientes, Chihuahua, Coahuila, Durango, México State, Guanajuato, Hidalgo, Jalisco, Nuevo León, Puebla, Querétaro, San Luis Potosí, Sonora, Tamaulipas, Veracruz, and Zacatecas. It is widely distributed in the Chihuahuan Desert Region . In the United States it occurs in Arizona, Colorado, New Mexico, and Texas. The population in the Tehuacán-Cuicatlán region in Puebla is disjunct from the main population. Records from Baja California Sur require confirmation. This is the most wide-ranging cholla species.
Altitude range: 40-1500 metres above sea level.
Habitat and Ecology: The species inhabits deserts, grasslands, xerophyllous scrub, oak-juniper woodlands, bajadas and slopes, on sandy, loamy to gravelly substrates. It can survive in human modified habitats. In Tiburon island it grows near the shore, where it generally occurs with Peniocereus striatus. The reproductive potential of this species is enormous, being able to reproduce sexually and also asexually by detachable stem fragments. There are no major threats for this species. Stem fragments are easily dispersed by cattle. Its range and population are likely increasing with cattle-ranching.

Cultivation and Propagation: Cylindropuntia molesta is a a much decorative hardy cactus occasionally grown for horticultural purposes. It is a summer grower species that offers no cultivation difficulties. Throughout its natural range it is often used in gardens and is a carefree, attractive plant. The stems get thinner in winter but do not droop, making this cholla a good year-round garden subject. Its cylindrical densely spiny joints provide a striking accent for an otherwise dormant cactus garden. The species is incredibly widespread in nature, with some clones much more tolerant of cold and winter moisture than others.This small to medium-sized cholla seldom 1.2 m)tall in cold climates, although it becomes a densely branched bush.
Soil: Use a very a particularly draining substratum, as it is sensitive to rottenness when in presence of humidity and low temperatures and let the soil dry out between waterings, since it's natural habitat is in sandy or gravelly, well draining soils.
Repotting: Repot in the spring, when their roots become cramped. Generally, they should be repotted every other year in order to provide fresh soil. After repotting, do not water for a week or more.
Water: In summer, during the vegetative period, it must be regularly watered, but allowing the substratum to completely dry up before irrigating again (but do not overwater); in winter, it’s to be kept dry. Preferable not to water on overcast days, humid days or cold winter days.
Hardiness: It is a not very frost resistant cactus, hardy to -2° C (or less if very dry). However in cultivation it is better not to expose it to temperatures lower than -0° C, even if in an aerated and protected location, in order to avoid the formation of anti-aesthetic spots on the epidermis. In presence of high atmospheric humidity avoid any frost as it is particularly sensitive to root rot. It can handle extremely high temperatures in summer.
Exposure: Outside full sun or afternoon shade, inside needs bright light, and some direct sun.
Use: It is suitable for “desert” gardens, in association with other xerophytes. Where the open air cultivation is not possible due to the climate, it is to be cultivated in pot in order to shelter it in winter.
Traditional uses: The small, red fruit are known among the Spanish-Americans as tasajulla and garrambulo.
Warning: It is armed with treacherous spines that are extremely sharp (This is one of the most dangerous of all cactus). Handle it with extreme caution, and keep it away from gangways and areas frequented by children and animals. Spines must be meticulously removed with tweezers.
Propagation: Scarified seeds, stem division. The stem segments root easily and grow rapidly when placed in loose, well-draining soil.