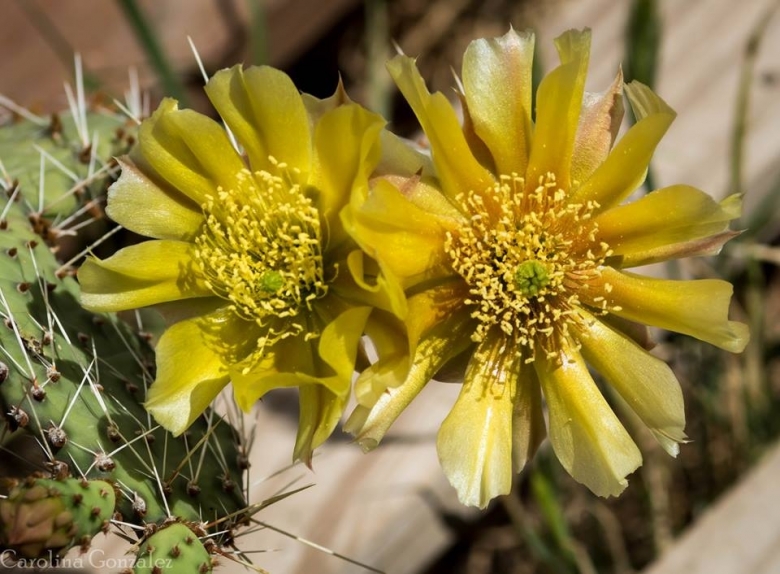 Origin and Habitat: West Texas. Brewster County, west Texas. Apparently restricted to the limestone hills near the Rio Grande, near Mariscal Mt. to Boquillas Canyon, in the Big Bend National Park, possibly adjacent Coahuila in Mexico (Northern America). Even though Opuntia aureispina has a limited range, its population is dense.
Altitude range: 500-600 metres above sea level.
Habitat and ecology: This cactus is found in fractured limestone of low hills. It is also fairly common on the floodplains near Boquilla Canyon. No major threats are known for this species. Opuntia aureispina hybridizes at least in part of its range with Opuntia phaeacantha (= Opuntia x spinosibacca M. S. Anthony) and Opuntia macrocentra (= Opuntia x rooneyi M. P. Griffith). 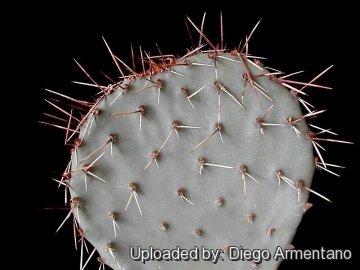 Cultivation and Propagation: Opuntia aureispina is a much decorative frost hardy, summer grower species that offers no cultivation difficulties. Its small bluish pads provide a striking accent for an otherwise dormant cactus garden.
Soil: Use a very a particularly draining substratum, as it is sensitive to rottenness when in presence of humidity and low temperatures and let the soil dry out between waterings, since it's natural habitat is in sandy or gravelly, well draining soils.
Repotting: Repot in the spring, when their roots become cramped. Generally, they should be repotted every other year in order to provide fresh soil. After repotting, do not water for a week or more.
Water: In summer, during the vegetative period, it must be regularly watered, but allowing the substratum to completely dry up before irrigating again (but do not overwater ); in winter, it’s to be kept dry. Preferable not to water on overcast days, humid days or cold winter days.
Hardiness: It is a quite frost resistant cactus, hardy to -7° C (or less if very dry). However in cultivation it is better not to expose it to temperatures lower than -0° C, even if in an aerated and protected location, in order to avoid the formation of anti-aesthetic spots on the epidermis. In presence of high atmospheric humidity avoid any frost as it is particularly sensitive to root rot. It can handle extremely high temperatures in summer.
Exposure: Outside full sun or afternoon shade, inside needs bright light, and some direct sun.
Use: It is suitable for small “desert” gardens, in association with other xerophytes. Where the open air cultivation is not possible due to the climate, it is to be cultivated in pot in order to shelter it in winter.
Warning: It is armed with treacherous glochid barbs. All prickly pears have tiny, hair-like glochid thorns in clusters on the pads. The barbed glochids cause extreme discomfort and must be meticulously removed with tweezers.
Propagation: Propagation: scarified seeds, stem division. Prickly pear pads root easily and grow rapidly when placed in loose, well-draining soil.