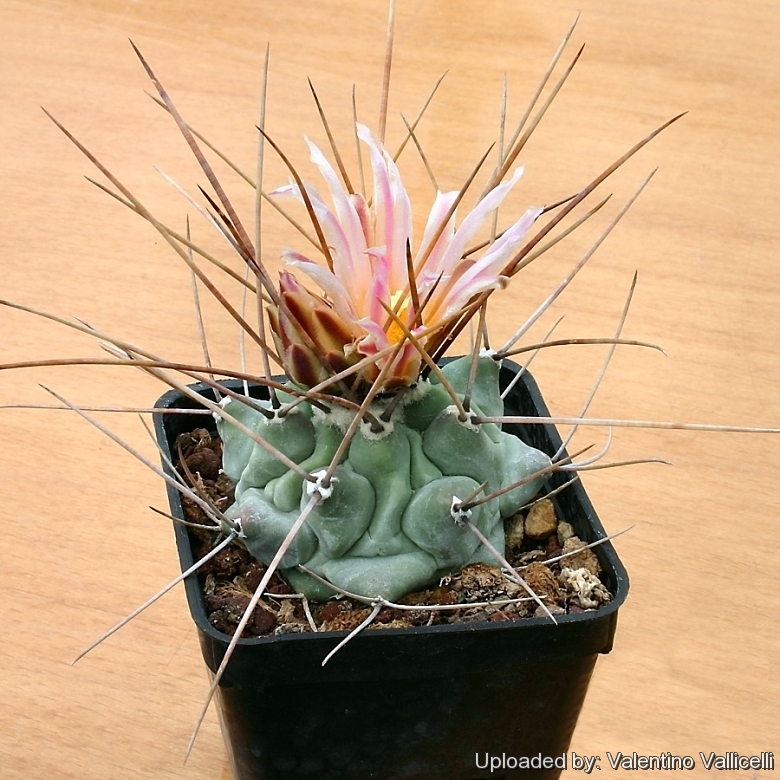 Origin and Habitat: It occurs in Coahuila and Nuevo Leon, Mexico.
Altitude: 1200-1900 metres above sea level.
Habitat: It is widespread and quite common in the Chihuahuan Desert in xerophytic shrubland on calcareous soils. There are no major threats to this species, although the habitat is overgrazed by goats.

Description: Thelocactus rinconensis is one of the most decorative cacti of the deserts of Mexico and extremely variable in its spines. Thelocactus rinconensis has received many unnecessary infraspecific epithets, and in cultivation it is commonly found under its three varieties, the type and var. nidulans with long spines, var. phymatothele with very short spines, but the only acceptable distinction is Thelocactus rinconensis subsp. hintonii, which occurs in Nuevo Leon at some distance from the main population.
Habit: Usually solitary, develops a squat and highly ribbed stem with a flattened top.
Stem: Spherical or somewhat depressed 4-15 cm tall, 9-20 cm across. It can have either a light glaucous-grey or green epidermis sometimes tinged with purple.
Ribs: 20 to 31, rather indistinct, divided into strong tubercles.
Tubercles: Conical, angled quite pointed, elongate toward the tip but flattened on top,12-27 mm long, 7-15 mm wide, 8-15 mm high.
Areoles: Round to elongate, mostly more than 2 cm apart and without nectaries.
Spines: Sometimes absent, very variable in length, depending on the clone, dark, usually black-brown , pale at apex, but also grey, brown or yellow, with a distinctive silvery appearance, and sometimes shredding.
Central spines: 0-4 straight, terete to angled, sometimes scaly with age, variable in length very short or to 6 (or more) cm long.
Radial spines: 0-5 very similar to the centrals, erect to radiating, straight 3-35(-50) mm long.
Flowers: 3-5 cm long, 2,7-3 cm in diameter, salmon-pink or whitish, often yellowish in the throat, or occasionally yellowish or magenta with a dark midvein. Tube short, pericarpels covered
with scales. The plants usually fail to flower until they are 5-9 years old.
Fruit: Spherical ta oblong with scales, 7-9 mm in diameter, greenish or yellowish, slightly fleshy when ripe, opening by basal pore.
Seeds: 1,7-2 mm long, 0,5-1 mm broad, net-patterned with polygonal or square areas.

Subspecies, varieties, forms and cultivars of plants belonging to the Thelocactus rinconensis group 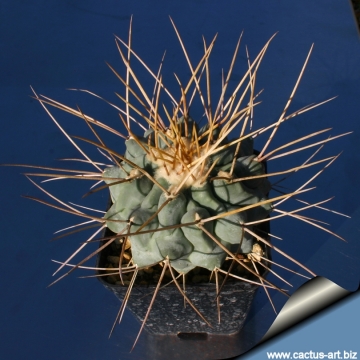 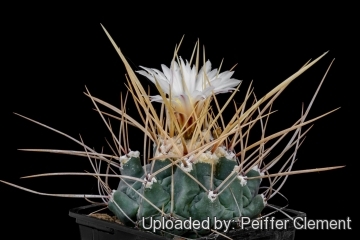 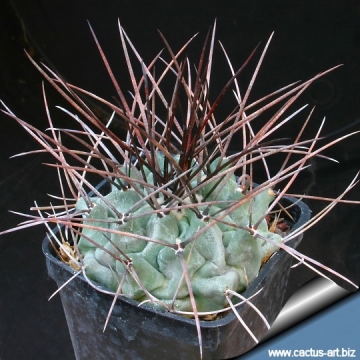 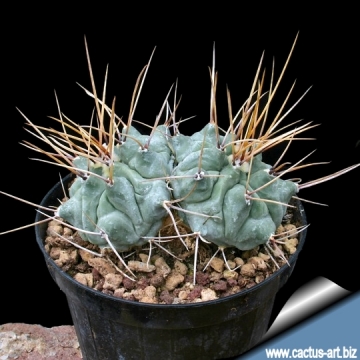 Cultivation and Propagation: Thelocactus rinconensis is a summer grower species easy to cultivate.
Growth rate: It is a slow growing species.
Soil: Use mineral well permeable substratum with little organic matter (peat, humus), plants may become too elongated if compost is too rich.
Repotting: Re-pot every 2 years. Use pot with good drainage.
Fertilization: It grows much faster with a low nitrogen content fertilizer in spring and summer.
Watering: Requires careful watering to keep plant compact. Water sparingly from March till October, the thin, fibrous roots suffer if there is humidity, therefore the plant should be watered only when the surrounding terrain is dry. Keep dry as soon as the temperature starts dropping in October and keep it perfectly dry in winter at temperatures from 5 to 15 degrees centigrade.
Hardiness: They need to be kept in a cool place during winter rest and are somewhat resistant to frost if kept on the dry side prior to, and during, cold weather ( they are hardy to -5 C ° C or less for short periods). Although it is one of the easier cacti to grow, it tends to rot in winter during the resting phase, if kept wet. In the rest period no high atmospheric humidity!!
Sun Exposure: Requires full sun in winter and some protection in summer, its colour tends to richer and darker when grown in light shade.
Uses: It is an excellent plant for container growing. It always looks good and stays small.
Pests & diseases: It may be attractive to a variety of insects, but plants in good condition should be nearly pest-free, particularly if they are grown in a mineral potting-mix, with good exposure and ventilation. Nonetheless, there are several pests to watch for:
- Red spiders: Red spiders may be effectively rubbed up by watering the infested plants from above.
- Mealy bugs: Mealy bugs occasionally develop aerial into the new growth among the wool with disfiguring results, but the worst types develop underground on the roots and are invisible except by their effects.
- Scales: Scales are rarely a problem.
- Rot: Rot is only a minor problem with cacti if the plants are watered and “aired” correctly. If they are not, fungicides won't help all that much. To prevent rottenness it is also advisable to surround its root neck by very rough sand or grit, this help a fast water drainage.
Propagation: Nearly always from seed, since the plant rarely produces plantlets.