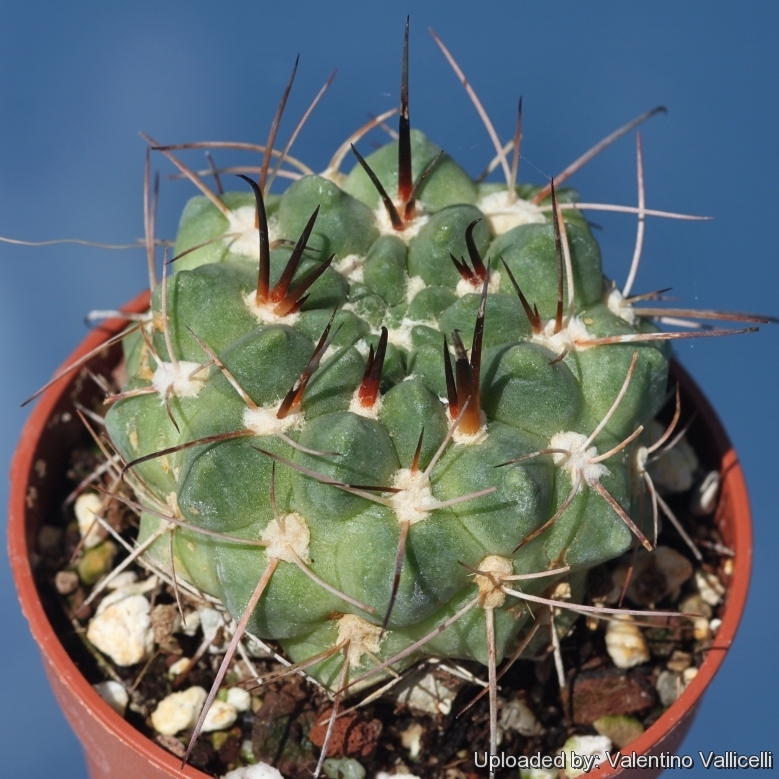 Origin and Habitat: It is a widespread and relative abundant species at elevations of 3000-5000 m from the Puna of Jujuy to the east of Salta in Argentina and in Oruro, Bolivia and probably for a small portion in Peru (Neowerdermannia peruviana?).
Habitat and Ecology: Neowerdermannia vorwerkii is a cryptic species that grows in rocky soils in high-altitude grasslands. In nature the plants withdraw deeper into the ground with the arrival of cold weather. In Jujuy (Argentina) and Bolivia, this cactus is consumed as a potato substitute. It is particularly used to prepare special dishes for the celebration of certain holidays. It is reported that up to 30,000 plants of this species are harvested each year for consumption during the festive season. However, it is not known how this extraction affects the population of this species and in many areas of its wide range it seems to be relatively abundant.

Description: Neowerdermannia vorwerkii has the form of an inverted cone with the flat top almost at soil level, but in cultivation it usually shows a spherical shape, bearing flowers almost laterally. The fat underground stock is formed by part of the stem (identifiable from the remnants of old areoles) merging with the tuberose root (identifiable from the fine lateral roots). The spines are brownish, spreading star-like from the areoles. The flower is white with a lilac midrib to the petals, and scaly but bare with distinct nectar chamber. The genera Gymnocalycium and Weingartia are very similar, but the areoles of Neowerdermannia are located in the depressions between the tubercles and the tiny fruit contain very few seed.
Stem: Depressed globose, partially underground, green, pale green or dark grey-green, 6-8(-10) cm across.
Root: Thick turnip-like.
Ribs: 16 or more, indistinct, spiralling, deeply divided into bluntly conic tubercles, 3-sided, with a triangular flattened upper side, and an acute, hatchet-like under side.
Areoles: Found, uncharacteristically for cacti, at the base of the tubercles instead of at the apex and with white-wool when young.
Radial spines Up to 10 spreading star-like, curved, blackish at first, later whitish or brownish, to 17 mm long. Lowest directed downward.
Central spines: 1-3, often hooked, whitish, brownish to grayish, to 2(-4) cm long.
Flowers: Almost lateral, funnel-shaped, tepals white or pale lilac-pink with a darker midline, 15-20 mm long and in diameter, bare (without hairs) but scaly and with a distinct nectar chamber.
Blooming season: May or June.
Fruits: Deep seated between the tubercles, globose, green, becoming reddish, 5-8 mm in diameter. Opening when ripe by a partial circumscissile splitting near the top of the fruit with the partial fruit cap tilting outward at about 160°.
Fruiting: The fruit mature the year after.
Seeds: Blackish to brown, large, 2.2 x 1,4 mm, rugose, broadly oval or shaped like a comma, ruminate; border expanded around hilum; cells gradually smaller towards hilum. Hilum inconspicuous.

Cultivation and Propagation: These plants come from mountainous areas, so like bright light, cool and dry conditions in the winter; this is important for the flowers as well as for their health. Without this cool winter period (0-10° C) they normally won't get many buds. They have a thick taproot and are of difficult cultivation and rot prone because of a great sensitivity to the excess of watering, not easy to get to any large size on their own roots really a challenge to grow into a large clump. They are commonly grafted to avoid root problems and to make easier to grow.
Sun Exposure: Suited for sunny-brightly exposure; can tolerate light shade.
Cultural Practices: Suited for airy exposures. Needs deep pot and good drainage to accommodate its tap root.
It is very cold resistant as low as to -10° C or less for short periods of time. On a graft the plants are easier to grow, but the body splits if over-watered (especially in spring).
Pests & diseases: Itis especially prone to root rot, therefore, underpot in a smaller container filled with very porous compost.
Propagation: Seeds, also can be grown from cutting or graft. Seeds can be sown in the spring or summer. The seedlings should not be disturbed until they are well rooted, after which they can be planted separately in small pots.
Traditional uses:
Food: The plant known locally as “Achacana” is eaten in Jyjuy (Bolivia) as a substitute for potatoes. The swollen underground stern is harvested at certain times of year and it can even be found for sale in local markets.