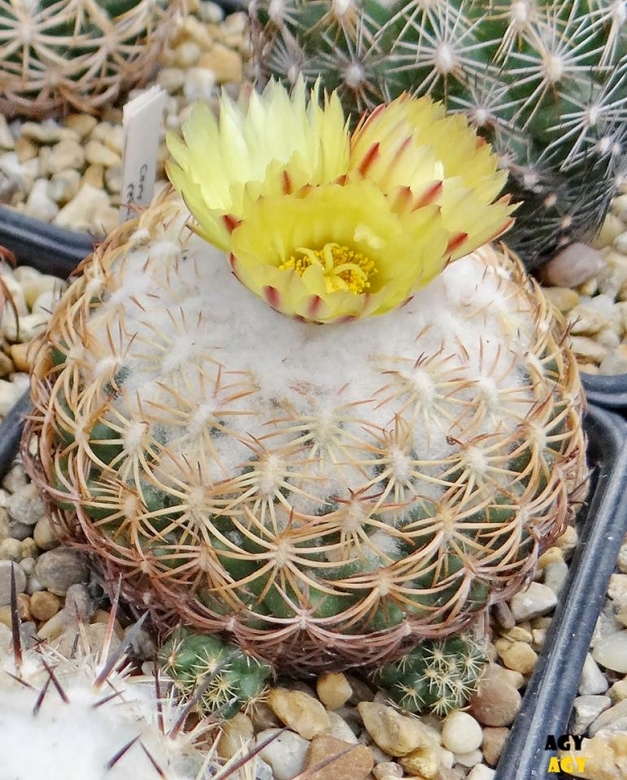 Description: Coryphantha retusa var. pallidispina is one of the innumerable forms of Coryphantha retusa which is one of the most widespread and morphologically variable taxon. Coryphantha retusa var. pallidispina was described by Backeberg (Cactaceae VI: 3874, 1962) as a small greyish-green cactus thickly covered with tawny wool, with 15 yellowish to pale-grey spines, among them 12 more rigid with thickened bases, the other 3 much thinner, close to each other and curved backward. The tubercles more closely set than the type. The flowers are deep yellow and borne from the centre of the plant. It flowers profusely. This pale spined variety is controversial, others forms are similar and plants from other localities look more like it. Field-studies have shown, this is just one form of Coryphantha retusa.
Remarks: Coryphantha retusa is a widespread and variable species that has received an undue number of names. The differences usually concern only the spination, however the colouring, size and density of spines is greatly influenced by the conditions of culture, at lower light levels the spines are less numerous, delicate and white, while with strong solar radiation the spines are stronger with a darker tint. Minor differences can also be found in the colour of flowers sometime with a paler or darker yellow tint, and in the size and shape of tubercles.

Cultivation and Propagation: In culture Coryphantha retusa var. pallidispina is without problems, but it grows slowly. It does best in slight shade, but does well in full sun, too. It is sensitive to over-watering (rot prone), and needs a very porous soil with good drainage.
It flowers quite early, but needs about 8-12 years to reach its typical, definite aspect. It tolerates fairly low temperatures as long as it is kept dry (hardy to -5° C or less, for short periods of time).
Propagation: Propagation is by seed.