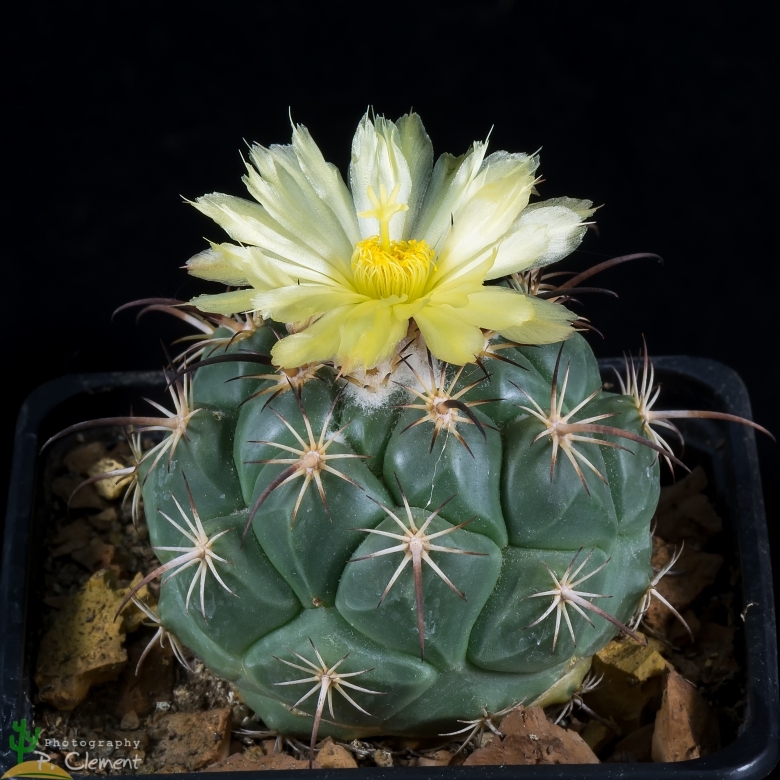 Origin and Habitat: Coryphantha grandis grows in the broad valley of the Rio Nazas stretching east from El Palmito, Durango, Mexico.
Habitat and ecology: This species grows on limestone rocky soil, mostly on the south sides of hills in rather sparse grass. During the rainy season, the grass would give the plants a little shade. But during most of the year it would be nearly full sun conditions.

Description: Coryphantha grandis is a large form of Coryphantha longicornis with shorter central spines described by Lew Bremer in 1978 from N. Durango, Mexico. Coryphantha longicornis is quite variable especially regarding the length of the lower central spine and body size. The plants with shorter central spines and larger stems with more spiral ribs are sometime referred as Coryphantha grandis, while those with longer centrals are referred as Coryphantha longicornis. (But this classification is arbitrary and intermediate form are commonly found either in habitat and in cultivation) In the original description, the data given for the body size of C. grandis is: spiral count of 13:21 for the tubercles, and body to 16 cm high and 14 cm in diameter. But most plants in the field do not match the high spiral number given for the type plant. Usually varying from a count of 5:8 and 8:13. The tubercle size on the plant with 5:8 count is somewhat .larger than the other 3 with 8:13 count. The plants, within a very small variance, have a body size size of 10 cm. tall by 13 cm. in diameter. It can be assumed that a very large plant was used for the original description. A very large and old plant will have a higher spiral count than a smaller or younger plant. If the above mentioned remarks are true, then a plant that was not a representative of the average set of characters was used for the basis for the original description. Field observations suggests that there is not sufficient ground to differentiate this species from Coryphantha longicornis Boedecker. In all aspects when comparing the descriptions of the two species, the only area of significant difference is in the number of spirals on the body. But if a high proportion of plants at the type location of C. grandis still fit the description of C. longicornis, it would be better to enlarge the description of C. longicornis to allow for the case of a very large specimen with this higher spiral.
For more details see: Coryphantha longicornis.

Subspecies, varieties, forms and cultivars of plants belonging to the Coryphantha longicornis group 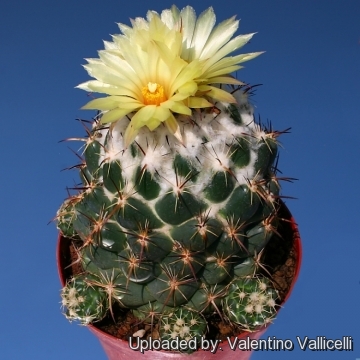 Coryphantha grandis Photo by: Valentino Vallicelli
Send a photo of this plant.

Cultivation and Propagation: In culture it is without problems, and regularly shows its large yellow flowers. It does best in slight shade, but does well in full sun too. It is sensitive to overwatering (rot prone), and needs a very porous soil with good drainage. It flowers quite early, but needs about 8-12 years to reach the typical, definite outlook. It tolerates fairly low temperatures as long as it is kept dry (hardy to -5° C or less for short periods of time).
Propagation: Propagation is by seed.