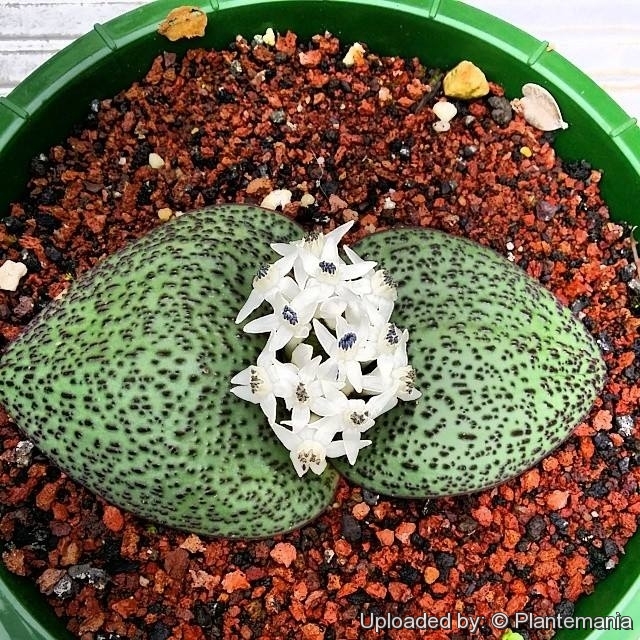 Massonia jasminiflora Photo by: © Plantemania
They all have just two leaves which usually lay flat or nearly so on the ground and which are often patterned, hairy or pustulate. The flowers emerge out of the centre of the pair of leaves and the long deep purple or almost black anther are the most obvious parts. As its name suggests, the flowers have a scent like jasmine.

Origin and Habitat: Massonia jasminiflora is a beautiful species from the costal regions and the climatically severe interior of South Africa (Free State, Gauteng, Northern Cape, North West), and Lesotho, further east than most other species.
Habitat and ecology: Lowlands and Foothills grasslands and montane grassland and stony ground at relatively high altitudes. In winter the temperatures are often well below freezing and snow may fall on the mountains. The flat leaves no doubt saving it from being eaten by grazing animals. Although this species occurs in a summer-rainfall area, it grows and flowers in winter and the blooms are very conspicuous white and strongly scented. These characteristics make them attractive to pollinators, particularly as nothing else is in bloom and the grassland has turned a uniform golden brown. This peculiar habit of M. jasminiflora may have evolved to permit the best chances for pollination since most other grassland flora is dormant at their flowering time.

Description: Abraham's Book or the Buttonhole Flower, scientifically Massonia jasminiflora has just two large darkish green leaves which arise from a small bulb and lie flat on the ground like an open book. The leaves are sometimes with reddish streaks, sometimes with pustules, pustulate hairy, or knobbly. From the centre of the open book come a mass of beautiful white flowers with green, blue, deep purple or almost black anthers, whose scent are reminiscent of jasmine and provide the plant with its specific name. It is the smallest growing of the genus and - because of the wide range of this species - there are many variations and these variations was previously considered different species, but recent work using DNA has 'lumped' these forms together as being the same species.
Derivation of specific name: As the specific name suggests, the flowers are highly perfumed, suggestive of Jasmine.
Bulb: Small, globose, white and shallow rooted.
Leaves: 2, usually lay flat or nearly so on the ground, broadly oblong to ovate, subacute, thin glabrous, dark green, sometimes with reddish streaks, smooth, not spotted or sometimes with pustules or knobbly, occasionally ciliate 3-6(-7.5) cm long, 2-5 cm broad.
Inflorescece (umbel): Sessile, 2.5 or more in diameter; outer bracts ovate, acute, much imbricated, 12 mm long; outer pedicels 6-8 mm long.
Flowers: The flowers are white (or pink), often strongly scented like jasmine. perianth white, 12-28 m long. Segments lanceolate, reflexing, half as long as the slender cylindrical tube; filaments ligulate, 3 mm long; anthers small, oblong, green, blue, deep purple or almost black anthers. 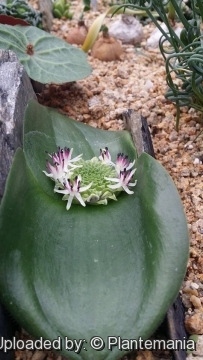 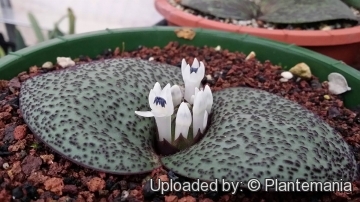 Occasionally forms occur whose leaves are smooth or with few pustules, but more often they are covered in pustules. Photo by: © Plantemania 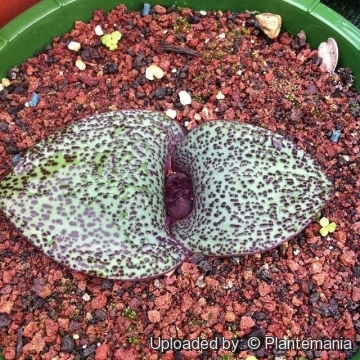 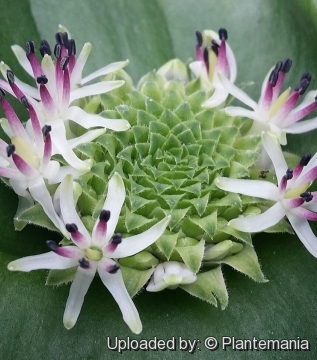 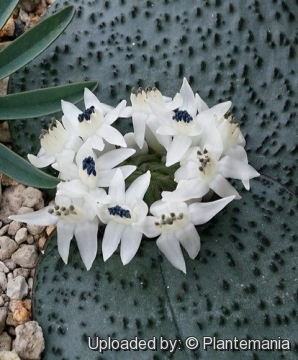 Massonia jasminiflora Photo by: © Plantemania
Send a photo of this plant.

Cultivation and Propagation: As with the other members of the genus, Massonia jasminiflora requires the protection of an alpine house or bulb frame in regions subject to frosts. Well-drained soil and a bright, sunny aspect give the best results. They can be propagated by seed, flowering can be expected from two to three years from sowing.
Traditional use: The genus Massonia is known to practitioners of traditional medicine who roast the bulb, grind it into a powder and rub it into incisions to treat certain illnesses.