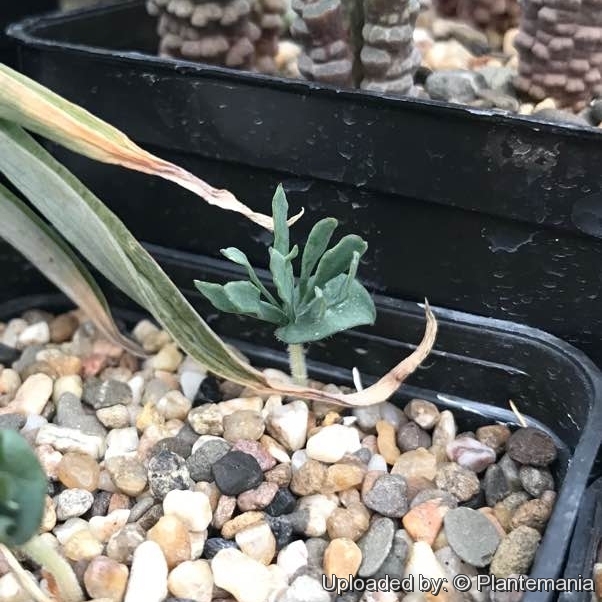 Origin and Habitat: Eriospermum alcicorne is endemic of South Africa (Western Cape, through the Little Karoo and eastwards to the Langkloof, northwards into the south of the Northern Cape around Nieuwoudtville and the Great Karoo around Richmond and Graaff Reinet in the Eastern Cape).
Habitat and ecology: This species has a large distribution over the arid parts of South Africa from Namaqualand to Willowmore mostly on clay and sandstone soils in variety of vegetation types. It is not considered to be threatened in habitat.

Description: Eriospermum alcicorne is a unusual tuberous, geophyte plant less than 8 cm tall, with a single, bluish heart-shaped, hysteranthous leaf (that expands after the flowers have opened) with peculiar flat enations (appendages) above. The inflorescence is up to 8 cm long and the flowering time is from late summer to autumn (January to April).
Tuber: Subterranean, pear shaped to irregular.
Leaf: Mostly solitary (but more than one can be produced from the tuber) with a reddish petiole 5-7.5 cm long and orbicular-ovate to cordate, coriaceous, bluish-grey, glaucous, reddish on the underside, glabrous and sometimes hairy, blade 8-20 mm long and 1,5 cm broad with rounded tip, lobed base and entire margins. From the face of which issues several flat, leaf-like, processes (appendages), linear, somewhat wart-like and sometimes branched, about 12 mm long, with 1–2 ascending linear pinnae from the middle of the margin. Leaves are dry at flowering.
Inflorescence: Up to 8 cm long, at a time when there are no leaves on the plant.
Flowers: Scented, whitish with a green or dark keel-line on each tepal, often tinged red, up tu 1 cm in diameter. The inner whorl of three tepals are borne erectly. As is often with the genus flowers are produced few and far between and some years hardly any flowering occurs. 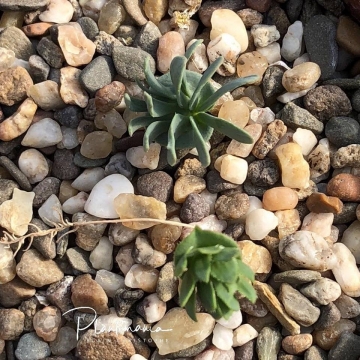 Cultivation and Propagation: Eriospermum alcicorne is a winter growing bulb that and lose itsleaves during summer.