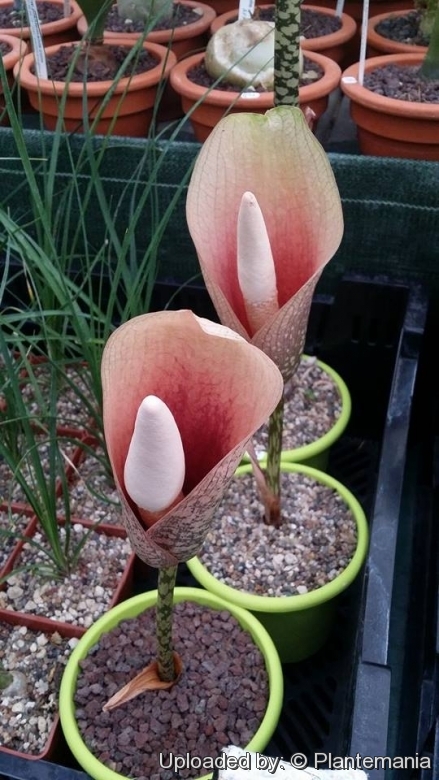 Origin and Habitat: Himalaya (India, Bangladesh, Bhutan, and Nepal). Also Burma and Northern Myanmar.
Habitat and ecology: Its natural habitat in wooded foothills and monsoon forest is often at much higher altitudes than many of its more tropical relatives and its cold tolerance is therefore higher. Amorphophallus bulbifer often grows along the roadsides near villages and in moist shady places.

Description: Arnorphophallus bulbifer, (a.k.a. Voodoo Lilies) is a monoecious, perennial, erect herb, 50-90 cm tall. It has a tuber (bulbous rhizome) to 15 cm in diameter, producing 1 leaf, characterised by bulbils borne at the fork (hence the name). The bulbils are like "little bulbs" and when the plant goes dormant they fall to the ground and start new plants the next spring. Its pink spathe is very nice looking with a soft greenish exterior, mottled and marbled with pale pink and the spadix is large, swollen and a flesh-coloured whitish-pink. Amorphophallus bulbifer is one of the prettiest species and the inflorescence doesn't smell that bad compared to others of the genus.
Leaves: Solitary (rarely a secondary leaf may develop under favorable growing conditions) much-branched umbrella-like and compound, held aloft on a single, very long petiole to form a lush jungly-looking mini-canopy. The leaf appears after flowers, and is 24-40 cm across, bulbiferous at the forks, lobes obovate-lanceolate, acuminate, 5-12 cm long. Leafstalk smooth, fleshy, dark green, mottled with whitish pink spots. Seedlings tend to make several subsequent leaves before they will enter their true first dormancy period.
Inflorescence: Stalk 10-70 cm long. The "flower" is characterized by a compound inflorescence composed of numerous tightly packed florets on a rod shaped "spadix" which is often surrounded by a leaf like bract or "spathe". The spathe is 10-30 cm long, oval to boat-shaped, convolute at base, opening above into an ovate obtuse limb, outside greyish green with blackish green spots, inside at base dark pink, paler towards the top. Spadix sessile, flesh-coloured, about the same length as spathe, male part (above) up to 4 mm long, female part (at the base) up to 2.5 cm long which consists of flower reduced to the style only. Stamens and ovaries many. At the top there is a sterile area, which is called "appendix". The unpleasant smell that the flower emits is only present for a few hours after the flower opens.
Fruit: Clustered, sub-globose berries. The fruit stalk is very pretty with the berries changing colours from green to red.
Phenology (in habitat): Flowers appears in April-June. If the flower is pollinated (normally by flies if the plant is outside) it will take 1 year for the plant to mature its seeds. Amorphophallus only blooms when mature and even so it doesn't bloom every year. Leaves appear during August-September.
Chromosome number:* 2n=26
Similar species: A. bulbifer has spadix similar to Amorphophallus commutatus, however, the spathe is white pink and appendage is short, thick and blunt at apex.

Cultivation and Propagation: Arnorphophallus bulbifer is one of the easiest species to grow. It grows well in a moist atmosphere.
This plant likes the shade and is an attractive feature to a shady corner. In spring, you will see a flower if the tuber is mature enough, if not then you will get a leaf. The dark green leaf and spotted stems provide an unusual look in the landscape.
Soil. It prefers a humus-rich soil that is predominantly organic matter mixed with a little loam and has had its structure and drainage improved by the addition of perlite, bark and a generous quantity of sand. If grown in a pot, more bark should be added to the substrate to ensure good drainage rather than grit which should be used if planted outdoors.
Watering: Water and fertilise well during the spring and summer growing months.
Outdoors. Plant it deep in a sheltered position, ideally beneath large evergreen shrubs and trees, where it will benefit both from the shady filtered light and the extra frost protection of the overhead branches. After the foliage dies down in the autumn it should be heavily mulched with several layers of leaves to protect it from the frost and wet or lifted and kept dry until March and replanted.
Hardines: Can survive winter in continental Europe with a thick mulch and plenty of grit in the substrate. Tubers are best dug up and stored over winter.
Traditional uses: Arnorphophallus bulbifer is used in Ayurveda. Corm powder with honey taken for duo-denal and intestinal ailments and ulcers. Corms made into a paste with Curcuma longa and applied on cuts and wounds; corms and petioles made into a paste and applied on burns; Amorphophallus bulbifer rhizome paste mixed with leaves of Litsea monopetala and Mikania micrantha applied exter-nally in stomachache.