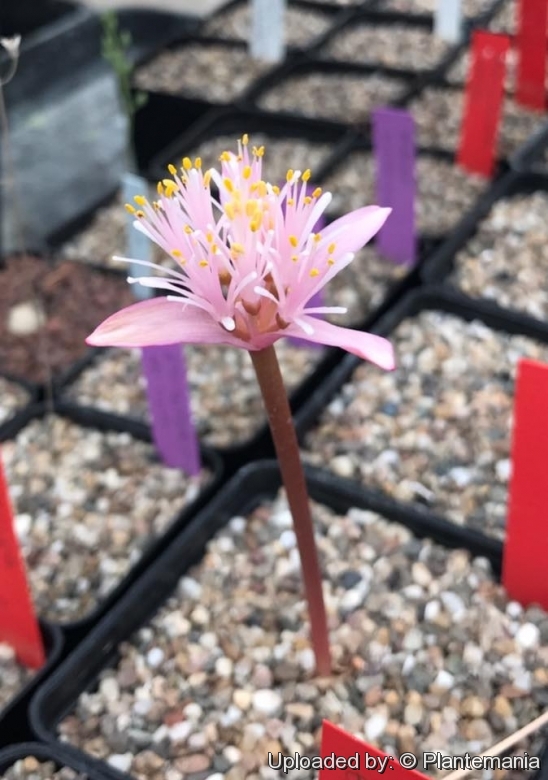 Origin and Habitat: Haemanthus barkerae is found in the plateau between the Bokkeveld mountains near Nieuwoudtville and the foothills of the Roggeveld Mountains, to the Hantamsberg near Calvinia, and bounded to the north and south by Loeriesfontein and the Tanqua Karoo, Northern Cape, South Africa
Habitat and Ecology: H. barkerae is a bulb that is indigenous to the winter rainfall areas. It tends to grow in clumps amongst rock in heavy clay soils often in the shelter shrubs.

Description: Haemanthus barkerae is a rare deciduous, winter growing geophyte that has a thick fleshy bulb and two strap-like or tongue-like leaves with purple-maroon markings on the underside. This is a clumping species that grows up to 20 cm high. The flowers are pinkish with yellow stamens. It flowers in March-April (late summer - early autumn) after which the leaves will show. This seems to be a very variable species.
Derivation of specific name: The name commemorates Winsome Fanny Barker (1907-1994), erstwhile Curator of the Compton Herbarium at Kirstenbosch National Botanical Garden in Cape Town, and noted for her work on Amaryllidaceae, Liliaceae and Haemodoraceae.
Bulb: The bulb is mostly round in cross section and has a well developed neck.
Leaves: 2 (occasionally one), dry at flowering, suberect to recurved, rather variable, narrowly ligulate to near elliptic, blue-green, 7- 80 mm wide, smooth or short-haired, patterned on the lower surface at the bases with dark green and maroon bars and spots. The leaves last from May to October and appear after the flowers which bloom between March and April.
Inflorescence: Haemanthus barkerae has a more or less spreading flower-head held on a deep to pale pink scape, spathe bracts 4-6, spreading, acute, pink.
Flowers: Pinkish 11- 21 mm long, with yellow stamens.
Taxonomy notes: For many years herbarium collections of Haemanthus pumilio Jacq. included specimens of a second species which went unnoticed because of its similarity - this similar but distinct species was named Haemanthus barkerae. 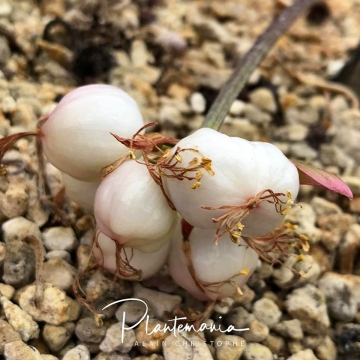 The gallery now contains thousands of pictures, however it is possible to do even more. We are, of course, seeking photos of species not yet shown in the gallery but not only that, we are also looking for better pictures than those already present. Read More...
Cite this page: "Haemanthus barkerae" Text available under a CC-BY-SA Creative Commons Attribution License. www.llifle.com 14 Nov. 2005. 22 Jan 2022. </Encyclopedia/BULBS/Family/Amaryllidaceae/34495/Haemanthus_barkerae>