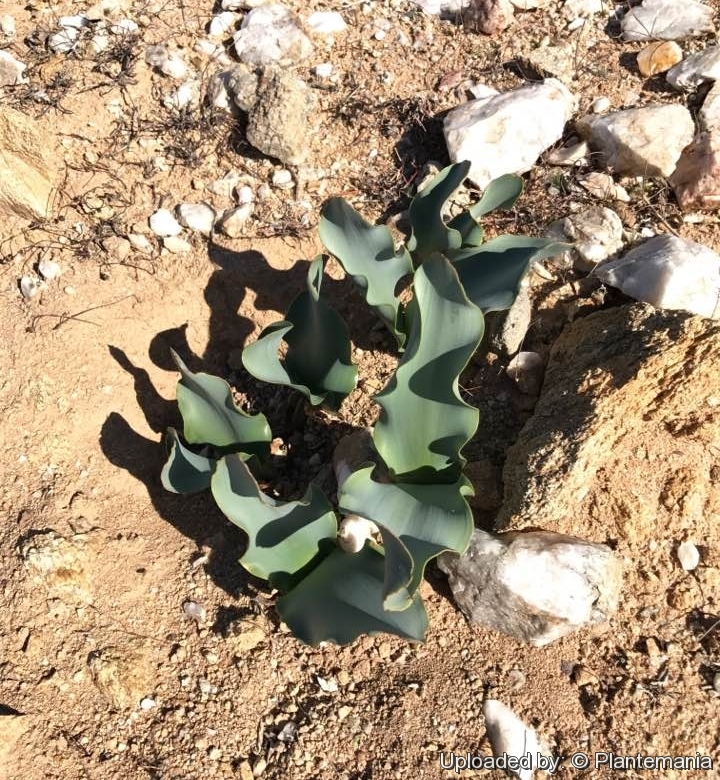 Origin and Habitat: Haemanthus namaquensis is a rare species from Southern Namibia to Kharkams in Namaqualand, South Africa. It is known from eight subpopulations in Namaqualand, all subpopulations are localized with few individuals and are scattered over a relatively wide range, extent of occurrence 4000 km².
Habitat and ecology: Desert, Succulent Karoo. This species grows in sheltered habitats under the protection of low shrubs or wedged between granite rocks in the escarpment between Namibia and Namaqualand. There are no significant threats. Illegal collecting is possibly a threat since it is purported to be exported for horticultural purposes. At least six populations are known. In the wild this is extremely rare, the populations are very small consisting mostly of a few clumps (up to ten plants) of vegetatively reproducing bulbs. Discovered in 1937 and hardly ever seen since as flowering in the wild is a once-per-decade affair if you are lucky.

Description: Haemanthus namaquensis is a deciduous, winter growing bulb. This species has a thick-scaled fleshy bulb and two leaves that are hard, waxy, blue-green with wavy margins. The inflorence is like a small vivid scarlet shaving brush. The flowers are held on red pedicles, in a loose narrowly compressed ball and are surrounded by 7-8 erect, oblong-lanceolate spathe valves. It blooms in autumn before the erect glabrous leaves, occasionally in late summer; but it is said to bloom only rarely in cultivation (about once in a period of five years). This species is seemingly not closely related to any other of the Haemanthus, but somewhat related to Haemanthus crispus. It may form clump.
Bulb: The bulb is large, broadly ovate, laterally compressed, fleshy, erect, broad (45-130 mm across) with one third above ground. The tunics are imbricate, very thick, distichous, cream-coloured, with oblique margins. The neck often with a pink blush or pink speckles. It naturally makes quite clumps and small bulbs even when mature.
Leaves: 2, erect, appearing after the inflorescence, very thick, oblong-lanceolate, glabrous on both surfaces, green to glaucous, sometime speckled with red towards the base, more or less undulate and sinuous (with wavy margins), flat or somewhat channelled, 17 to 45 cm long, 45 to 110 mm wide. The apex is acute.
Inflorescences: A bright scarlet inflorescences with narrowly compressed umbels, about 50 mm across. The peduncle stout, compressed, up to 150 mm long and 150 mm, plain red or slightly mottled, glabrous. The spathe valves are 7-8, lanceolate, large firm but not fleshy, without a paper covering and remain erect; they ere as long as or slightly shorter than the flowers.
Flowers: Numerous (about 40), scarlet with whitish tubes and tips. Pedicels 10-20 mm long, pale scarlet to white. Perianth 18-25 mm long; tube 2,5-4 mm long, slightly swollen at the base of each segment; segments erect, narrowly oblong, 15,5-22 mm long, 0,5-1 mm wide; tips obtuse. Filaments exserted by up to 9 mm, pale scarlet with white tips. Ovary subglobose 2-4 mm diam., pale green to pale scarlet. Style as long as the stamens [1].

Cultivation and Propagation: Haemanthus bulbs like to be slightly pot-bound and prefer to remain undisturbed for at least five years or until growth and flowering performance deteriorate. In cold climates terracotta pots are appropriate but in warmer parts these dry out too rapidly and plastic containers are more suitable.