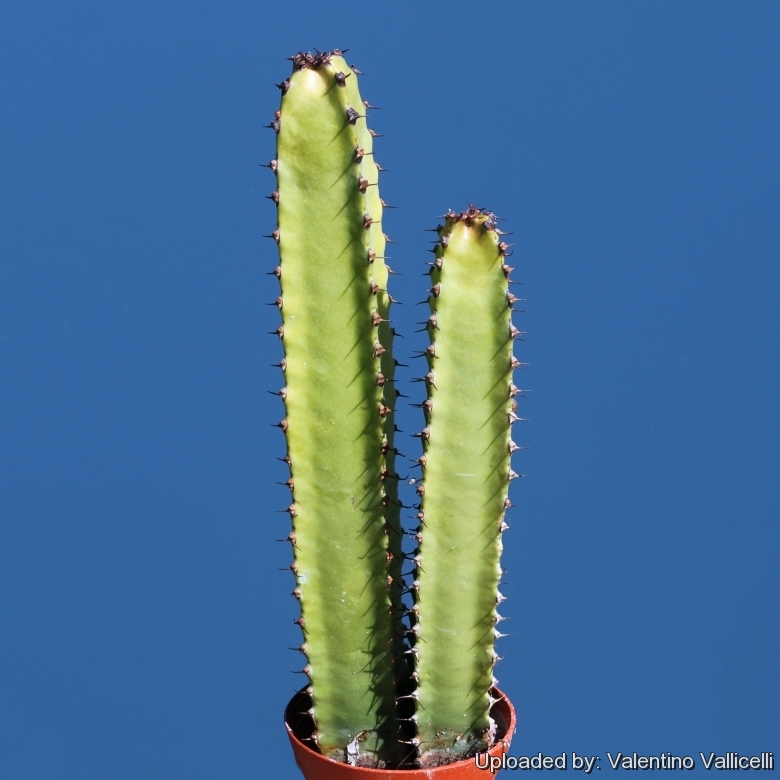 Origin and Habitat: Endemic to canary islands.
Habitat: Grows natively in the arid and humid environment of the narrow coastal belt, from sea level to 1100 metres. It occurs in dry lava formations on the barren shores and mainly on the south facing mountain slopes on all islands. It is one of the most abundant plants on the sea-cliffs.

Description: It is small succulent tree, 1 to 3(-4) m high. It clumps profusely from the base, one trunk may produce more than 150 branches as thick as a man's arm. The form "viridis" was used to indicate plants with light green stems (often this plants are known in cultivation as "green type" or "green form"), however in habitat both plants with fresh green and dark bronze stems are found growing together and plants with intermediates stems colours are also common, but in all other respects the plants are indistinguishable from others in the same colony. They can therefore be identified only by the stems colour.
Stems: Fleshy, stout, highly succulent, columnar, upright growing, cactus-like. They are deep green to reddish, 4 (rarely 5 or 6) angled up to 8 cm in diameter slightly spiralled. The surfaces, which are from 2 to 5 cm broad, are plain with a clean and smooth epidermis. The edges are obtuse and of a brown colour. The lateral branches forms an angle at their base, but are straight in the rest of their growth.
Spines: This plant is furnished of dark shining spines in pair. Perfectly regular, straight to cow-horn shaped, spreading laterally in rows along the four corners of the columns.
Flowers: Dark red to reddish-green in monoecious heads, surrounded by an involucrum consisting of 1 leaf with 5 division, which have externally 5 glands alternating with them. Males naked monoandrous, articulated with their pedicel surrounding the female, which is in the centre. Females naked solitary. Ovarium stalked. Stigma three forked.
Fruit: Maroon red on adult plants. The fruits hang out of the involucrum and each contain one suspended seed.
Remarks: It’s one of the more poisonous spurges. The latex which is very bitter and acrid contains diterpenes and is considered highly toxic. 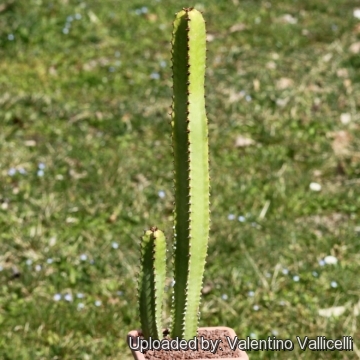