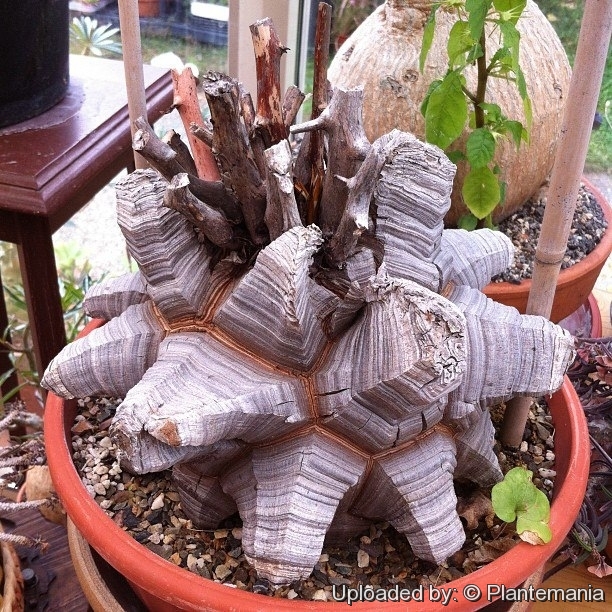 Dioscorea elephantipes Photo by: © Plantemania
32 years old specimen. Dioscorea elephantipes is a choice Caudiciform Succulent that produces seasonal twining vine from the top of the caudex. The vines reaches 2 m and grows rapidly during the growing season ( from Autumn to Spring) but usually dies back in the summer, leaving the caudex to survive the hot, dry season.

Origin and Habitat: Cape of Good Hope, Southern Africa ( including the Clanwilliam District of the Western Cape and the Graaf-Reinet, Willowmore and Uniondale Districts of the Eastern Cape).
Habitat and ecology: This species is appears to have a wide tolerance of growing habitats, growing in weathered rock, on dry, stony slopes, under the protection of karroid bushes. Pollination is done by bees and bumble bees. The plant is adapted to growing in areas with seasonal rainfall, by going dormant in the dry season. In its natural environment it rests during the hot dry summer. Dioscorea elephantipes grows in the winter and the spring months. The above ground caudex is protected by elephantine bark while it rests. It is used to extreme heat (above 40°C), but it can also take low temperatures (-4°C).

Description: The elephant foot, Dioscorea elephantipes, is a perennial deciduous caudiciform vine belonging to the monocot yam family (Dioscoreaceae). The enlarged, exposed tuberous base is a water-storing organ, called a caudex . The caudex most often reaches a diameter of 60-90 cm, but sometimes 3 (or more) meter and is covered in tough armor-like plates. It produces a seasonal clinging growth up to 6 metres long. The leaves are heart-shaped. It bears small insignificant yellowish green flowers.
Derivation of specific name: elephantipes in Latin refers to the elephant-like appearance on the outer covering of the bark.
Caudex: The large and partially exposed tuberous stem is woody-looking, firm in texture but succulent within, and covered on the outside with thick greyish-brown bark that becomes deeply cracked into polygonal, superbly sculptured, prominent, polygonal corky plates with age, it can reach 3 (or more) m in diameter with a height of nearly 1 m above ground (but usually doesn’t exceed 1m in width), and a maximum weight estimated at 365 kg. The tubercle-covered tuber resembles an elephant's foot or a tortoise shell.
Stems: Dioscorea elephantipes produces a seasonal (annual to semiperennial) slender, twining, glabrous, much branched vine from the top of the caudex. The vines reaches 2 to 6 m and grow rapidly during the growing season (from Autumn to Spring) but usually die back in the summer, leaving the caudex to survive the hot, dry season.
Leaves: Alternate, shortly petioled, suborbicular to heart shaped, rather broader than long, 2.5-5 nm broad, entire, moderately firm in texture, very glossy, bright green or glaucous, conspicuously mucronate. Remember it drops its leaves in late spring.
Flowers: Inconspicuous, small (up to 4 mm wide) greenish-yellow in clusters. The Dioscorea elephantipes is dioecious (male and female flowers are produced on different plants). The males are in erect inflorescences (lax shortly-peduncled racemes 5-8 cm long), the females in nodding to spreading spinescent, spikes. Male flowers are held in pedicels equalling or exceeding the flowers, with a lanceolate bract at the base, and often a bracteole at the middle. Perianth 3 mmlong. Segments spreading widely. Stamens nearly as long as the perianth-segments. Filaments filiform. Anthers oblong or globose, pale yellow, shorter than the filaments.Female flowers are held in pedicels finally deflexed, 6-8 mm long.
Blooming season: in habitat flowers normally appear in May or June. Seed is produced in September and October.
Fruit (capsules). Obovate-oblong, less than 2.5 cm long.
Seed: with a membranous wing 12 mm long, 6 mm broad.

Notes: This species was once nearly eradicated in the wild during the search for commercially valuable sources of steroidal saponins like diosgenin; used to synthesize cortisone and birth control pills. Fortunately, removal of plants from their habitat proved difficult, and as cheaper and more viable sources of these steroids became available, collection efforts ceased.
Remarks: This species has a large tuberous textured stem (caudex) that will slowly grow to resemble a tortoise (Hence the name Testudinaria) It often reaches a considerable size, sometimes more than 3 m in circumference. The tuber inner flesh is rich in starch and - even though it would be an expensive experiment - it is edible. (Hence the name Hottentot bread) 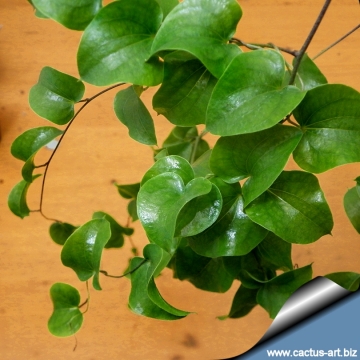 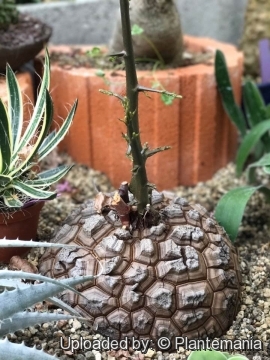 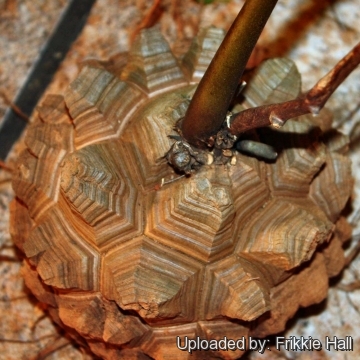 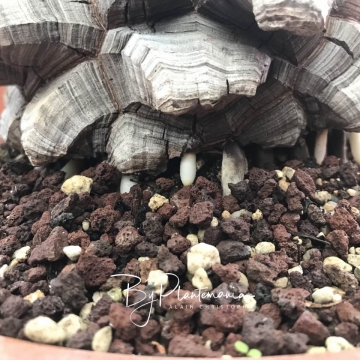 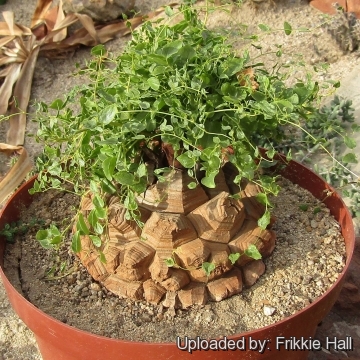 Frizzle head. Amazingly it did not try and make one strong vine, but a whole bunch of short stiff vines. Photo by: Frikkie Hall 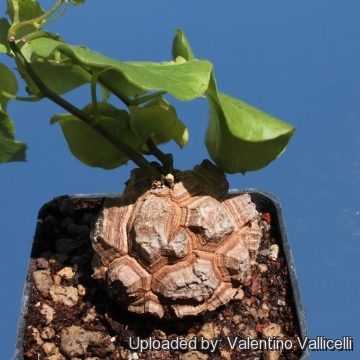 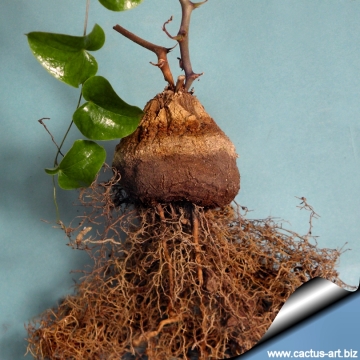 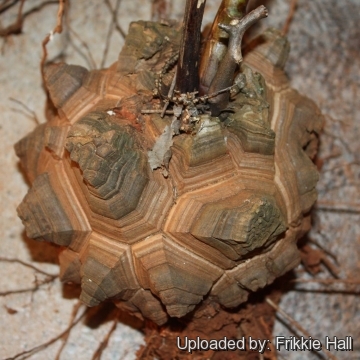 Dioscorea elephantipes is known as the elephant's-foot. Photo by: Frikkie Hall

Cultivation and Propagation: This plant responds well to cultivation and makes an easy and wonderfully unusual houseplant. Plants even five to ten years old are extremely nice. Vigorous, annual climbing stems can grow to as much as 2 metres in a season, however these can be trained quite comfortably around a wire hoop set in a pot when grown indoors. Dioscorea elephantipes will live for approx. 70 years in cultivation, if it is looked after.
Exposure: It prefers light shade, but keep the caudex in the shade.
Waterings: It needs moderate to regular water. Slow down or withheld water when the tuber is dormant in summer (after shedding its leaves). It will start growing again in Autumn. Watering can recommence once the plant has shown signs of producing a fresh shoot. Sometimes it ignores its proper growing seasons (from autumn to spring ) and keeps its vines growing long into its rest period, or sends up new vines much earlier than expected. In that case, paying attention to the plant and not the calendar is a good idea.
Hardiness: It is easy to grow if a winter temperature of 5° C can be maintained.
Propagation: Seeds, difficult from cuttings. Sow seeds 5mm deep and keep them warm. Sprouts best in indirect light. The seedlings' caudex forms below ground and will grow much faster if left underground for a couple of years.

by Cactus Art
There are a total of 16 Photos.
Click here to view them all!
Cite this page: "Dioscorea elephantipes" Text available under a CC-BY-SA Creative Commons Attribution License. www.llifle.com 14 Nov. 2005. 27 Nov 2022. </Encyclopedia/SUCCULENTS/Family/Dioscoreaceae/17507/Dioscorea_elephantipes>