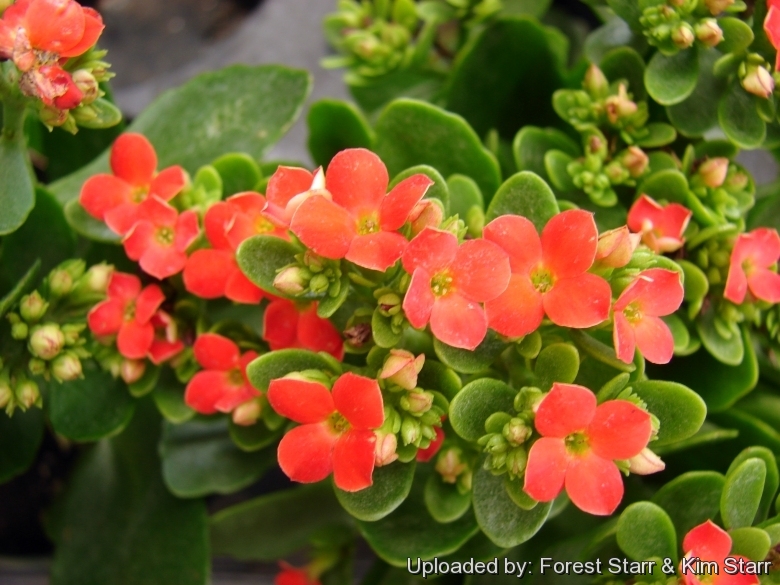 Origin and Habitat: Madagascar.
Altitude range: 0–50 metres above sea level.
Habitat: Kalanchoe blossfeldiana grows in humus soil in the the relatively cool plateaus of the Tsarantanana Mountains where it forms small upright shrubs. It is widely cultivated as ornamental and often escaped in waste places in southern USA (Florida) and in Indian Ocean Islands.

Description: Kalanchoe blossfeldiana, also known as 'Christmas kalanchoe' and 'flaming Katy', is a glabrous succulent, perennial, herbaceous plant, with dark green leaves reaching in culture a height of about 33-35 cm (up to 50-60 cm tall in it natural habitat). It is a widely sold and popular houseplant and has bright, vivid red flowers that last for weeks and can be induced to bloom in the winter, but is rarely seen in its original form, having been superseded by a number of improved forms. This species native of Madagascar, was introduced into Europe during the 1920s. It is named after Robert Blossfeld, a nurseryman of Potsdam, who recognised its horticultural value as a flowering pot plant, and contributed to its present-day popularity. Variants of different heights, or with orange, coral, rose, salmon pink, white or yellow, flowers both double or single are now available.
Stems: Erect, 20-50 cm tall.
Leaves: Leaf blades elliptic, ovate-oblong to obovate-spatulate, 3–10 cm cm long, simple, thick, fleshy, waxy, shiny, dark green, margins crenate (scalloped) or almost entire often red, apex obtuse or nearly acute and arranged in an opposite/subopposite fashion. The leaves stay green all year round but can become tinged with red when exposed to direct light for an extended period. The veins can be very hard to see. Although these thick leaves can seem quite strong, they are in fact slightly brittle and will break easily if mishandled.
Flower and inflorescence: The numerous, regular, bisexual flowers are typically scarlet, though the many named cultivars exhibit consider-able variation in colour and habit. The flowers are small, carried erect, fragrant and regular, clustered in dense terminal glabrous, not glandular cymes or corymbs of between 20 and 50, each cluster spreading at least 3-4 cm and held above the foliage .
Floral formula: K(4) C(4) A4+4 G(4) Sepals 4 small, green ascending, triangular-lanceolate, 4–10 mm long. Corolla scarlet cylindric, tube ca. 8-15 mm long green, with 4 red lobes wide-spreading, ca. 4 mm. There are 8 stamens in 2 whorls, 4 attached midway inside the corolla tube and 4 at the upper portion of the tube, all with brown anthers. There are 4 superior ovaries with short styles and expanded stigmas. Pedicels 5–20 mm long. K. blossfeldiana is protandrous, and the flowers of this species produce nectar from the scales situated at the base of the carpels. The lower stamens dehisce first, then those situated at the mouth of the corolla-tube. At this stage the carpels have elongated so that the stigmas are at the same level as the upper whorl of stamens. If cross-pollination has failed to take place, the stigmas can still receive pollen from these younger stamens.
Blooming season: It blooms mainly in late winter usually from January to April, although flowering may occur at any time throughout the year. They will continue to bloom for two or three months.
Fruit: A group of 4 follicles.
Chromosome number: 2n = 34, 68. 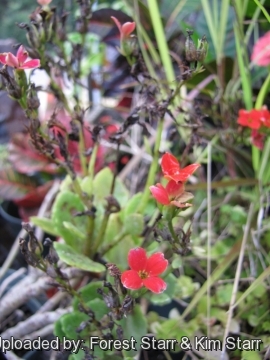 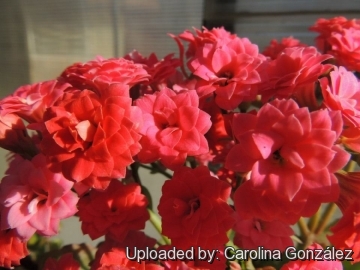 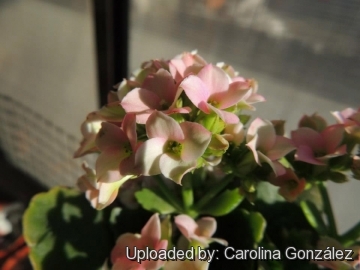 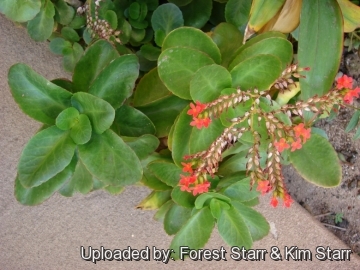 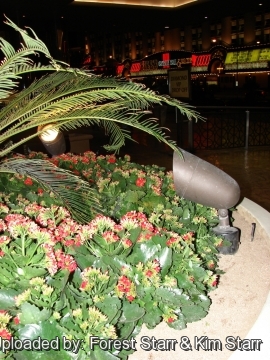 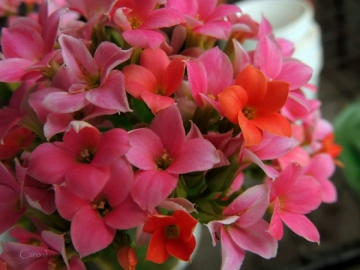 Cultivation and Propagation: Kalanchoe blossfeldiana is very easy to culture and makes an interesting blooming potted plant and is rewarding as indoor plant. The upright, much-branched growth habit and tolerance of low moisture conditions makes it also ideal for groundcover use, rock gardens, raised planters, or containers. It's grown primarily for its flowers, and its many cultivars produce masses of dainty blooms in assorted colours. Pastel varieties serve as pretty centerpieces for bridal and baby showers. They'll even bloom in low light, making them good for indoor dish gardens.
Growth rate: Its growth rate has been described as 'slow'.
Potting mix: Use a soil based potting mixture with the addition of a small amount of coarse sand, pumice or lava grit to ensure good drainage. They grow best in clay pots for aeration and need drainage holes in the bottom. Setting the container on a dish filled with rocks or gravel provides extra drainage.
Exposure: Keep this plant out of strong, direct sunlight; although exposure to the morning sun is fine. The Kalanchoe is best kept in a shady setting. In the home Kalanchoe blossfeldiana should be grown in sunny window. Flower formation in Kalanchoe blossfeldiana is stimulated by very short photoperiods. When growing kalanchoe in containers, they can be boosted to produce more buds and flowers by giving them 8 to 10 hours of sunlight per day.
Repotting; Plants that are not to be discarded should be moved each spring into pots one size larger. The maximum pot size needed should be about 12 cm.
Watering: It needs moderate watering in autumn and spring while in summer it should be watered thoroughly and allowed to dry before watering again. In winter give only occasional watering (only when the plant starts shrivelling), but it will generally grow even in winter if given water. These plants will survive on neglect. Kalanchoe blossfeldiana have the tendency to become abnormally gross and flabby if they are overwatered. Over-watering is the most common cause of plant failure. Avoid using cold water when watering plants because it could shock the plant.
Fertilization: From the end of spring to the beginning of autumn, feed the plant with a monthly dose of fertiliser. Pruned plants may be given a dose of full strength fertilising as a boost.
Frost resistance: Kalanchoe blossfeldiana grow well in normal room temperatures. It is native to Madagascar and will bloom at temperatures of between 15 and 16 degrees Celsius. Avoid temperatures below 5°C because they can kill the plant after a few hours.
Maintenance: Kalanchoe blossfeldiana holds the blooms on for many weeks and after the blooms lose their luster, is usually discarded. However, if it is pruned back hard and given spell in the garden, it will flower again next season. Pinch off the faded flowers and continue to pinch the tips of the plants for a few more months to promote a bushy plant. If not pruned the plants become leggy and need to be replaced.
Pest and diseases: Whilst generally disease free, Kalanchoe blossfeldiana can be damaged by pest insects such as Otiorhynchus sulcatus (vine weevil) or mealybugs.
Propagation: It is propagated by removal of tip cuttings in spring and root them in 8 cm pots filled with a mixture of peat moss and sand. Pot pots in a warm position in bright filtered light. Water the mixture whenever the top 1-2 cm dries out. When roots have formed and new growth appears, move each young plant into a pot of standard mixture. It grows easily roots and new plants are ready within months.
Warning: Parts of Kalanchoe blossfeldiana are poisonous if ingested. All members of Kalanchoe are toxic for livestock, birds and small animals. Dogs are reported to be particularly sensitive to the cardiotoxic effects of Kalanchoe. Death was reported in an iguana that ingested an entire K. blossfeldiana plant.