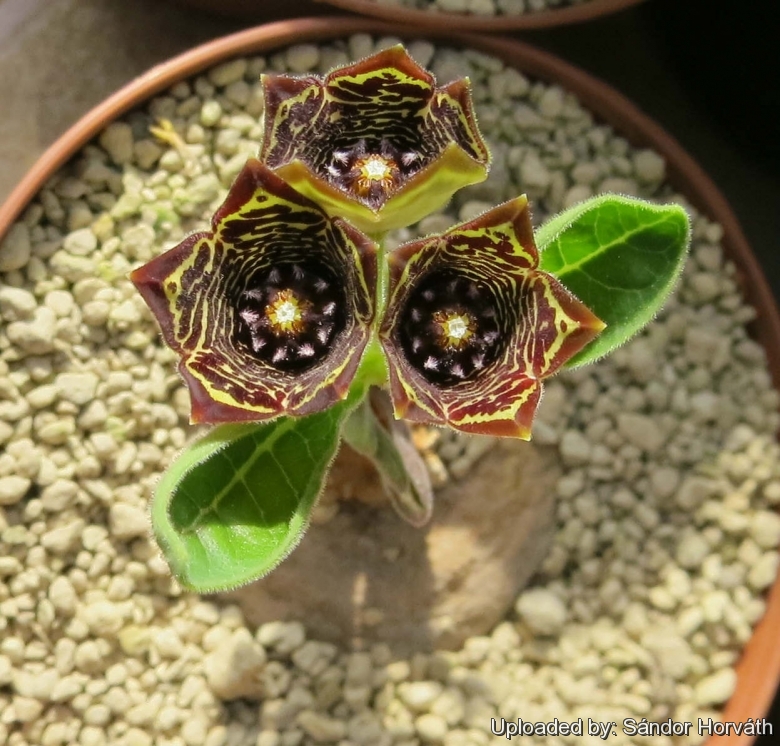 Origin and Habitat: Brachystelma buchanani is one of the commonest and most widespread of the African species, it can be found in Congo, Malawi, Zambia, Tanzania, Zimbabwe.
altitude range: Up to about 1500 metres.

Description: Brachystelma buchanani is an erect or procumbent perennial with annual stems, growing from a large fleshy tuber (caudex). The leaves are ovate-elliptic. The flowers are terminal in a 20-30-flowered umbel and give out an intense cow-dung-scent from midday until the early afternoon and when in full bloom attract flies in large numbers throughout the hotter part of the day, if the weather is sunny. The corolla up to 25 mm in diameter, is flat and wheel-shaped, blackish purple, and hairless. It probably has the largest and showiest flowers of the genus, and is closely related to Brachystelma chlorozonum.
Derivation of specific name: This species was named after the Scottish clergyman John Buchanan (1821–1903), resident in Republic of South Africa1861– 1877.
Tuber (caudex): Roundish, 5-10 cm diameter, flattish to depressed and often with slightly bowl-shaped central area.
Stem: 1 to few, erect to decumbent, stout, to 10 cm tall, with a very short spreading pubescence.
Leaves: Large, arranged in an alternate or opposite position, 3-1 cm long, 2-4 cm broad, elliptic-obovate to lanceolate, very obtusely rounded with or without a very short triangular point at the apex, basally tapering into a short petiole, both sides shortly pubescent, ciliate.
Inflorescences: Sessile terminal umbels, 5–30-flowered most flowers opening simultaneously. Pedicels 3-15(24) mm, long, shortly pubescent. Sepals 3-7 mm long, lanceolate, acuminate, pubescent. Corolla 15-25 mm in diameter, saucer-shaped, outside greenish, pubescent, inside wrinkled, cream with dark purple margin and stripes, glabrous or more or less white-hairy, on both sides, 5-lobed to half-way down. Corolla tube cup-shaped, 12-16 mm across. Corolla lobes 4-8 mm long, 5-8 mm wide triangular, acute and flat. Corona sessile, red-brown, about 2 x 4 mm, only basally shortly united and cup-like. Outer corona shortly cup-shaped at the base, 10-toothed. Teeth connected in pairs by a fleshy partition to the backs of the inner coronal-lobes, their free part 1 mm long, deltoid-subulate, erect or ascending (not spreading as originally described), retrorsely pubescent; inner coronal-lobes 1-1.5 mm long, oblong, emarginate, incumbent on the backs of the anthers and equalling or slightly exceeding them, glabrous. Pollinia D-shaped, c. 0.5 x 0.4 mm.
Fruits (follicles): One or two follicles per flower, thickly fusiform.
Chromosome number: 2n= 22 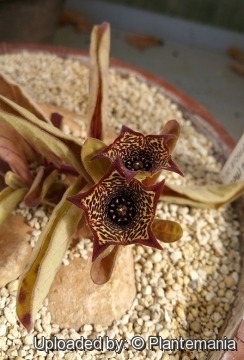 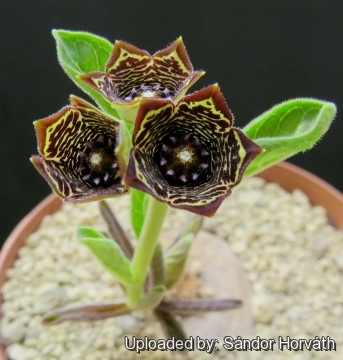 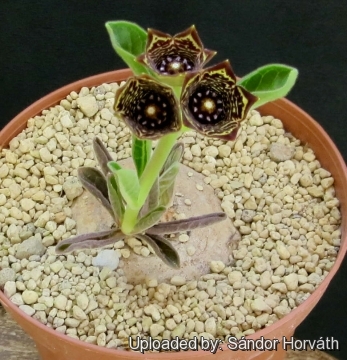 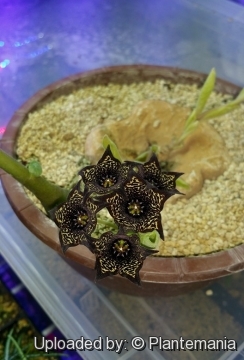 Cultivation and Propagation: In cultivation the plants are usually grown in semi shade, with the tubers wholly or (preferably) partially exposed to prevent scorching and rotting of the roots. This plant can take a good deal of water during active growth and should be watered only when not dormant. Keep dryish in winter. It should be overwintered in the greenhouse at temperatures over 12°C (avoid letting temperatures drop lower than 5° C). Use a very draining but rich soil. An error in cultivation may produce unsightly holes in the tuber.
Traditional uses: The large, fleshy roots of Brachystelma buchananii are said to have remarkable healing properties when applied to a wound and are used in some regions in central Africa. When applied to a wound the root is simply chewed and then laid on. Wounds of a serious nature thus dressed are said to heal rapidly.
*Reproduction: This species can be reproduced by seeds. Sow seeds in summer in a well drained medium.