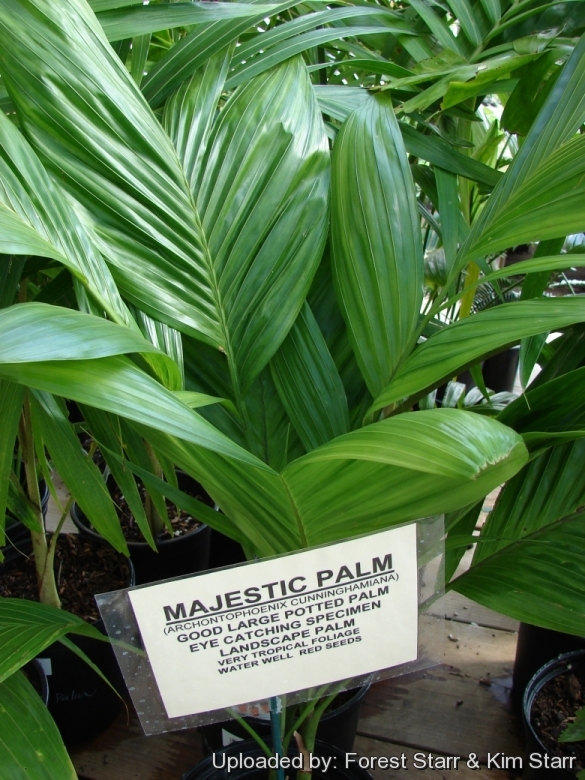 Origin and Habitat: Eastern Australian coast. (New South Wales and Queensland, from Mt Elliot to Durras Mountain)
Habitat: Rainforests in coastal districts, mostly in moist sites beside creeks and on alluvial flats and ruderal/disturbed, urban areas. It is widely cultivated and introduced in the tropics and subtropics (Brazil, Egypt, Hawaii, New Caledonia, New Zealand, Singapore, South Africa, United States) and has become a noxious weed in many areas where it has been used as an ornamental plant.

Description: Archontophoenix cunninghamiana is a slender arborescent Australian palm that can grow up to 25 metres tall (or more).
Crownshaft: The base of the petioles form a greenish-yellow to brown crownshaft that the leaves rarely droop below.
Trunk: Solitary, smooth, ringed of a uniform diameter with noticeable leaf scars. It can get to about 25-30 cm in diameter and may be enlarged at the base.
Leaves: Pinnately compound, deciduous, unarmed 3–4,5 m long, with 70–100 pairs of segments. Segments linear, 60–100 cm long, 3–8 cm wide, entire, bright or dark green on both surfaces, although there can also be brown scales underneath. Petiole 20–25 cm long, pale green, greenish-yellow to brown sheathing base 60–90 cm long.
Inflorescence: Monoecious, with both male and female flowers occurring on the inflorescence, hanging below the crownshaft, 1–1.5 m long, with a many branched panicle about 30 - 80 cm long, with creamy flower stalks. Sspathes 30–40 cm long.
Flowers: Pink to mauve; staminate (male) flowers are 6 mm log with 9–18 stamens; pistillate (female) flowers are 4 mm.
with the holding flowers.
Blooming season: It flowers and fruits all year round in its native range and Brazil while in sub-tropical climates it tends to flowers in midsummer.
Fruit: Round or ovoid green about 12-15 mm in diameter, turn bright orange-red at maturity. The fruit, There is often a noticible bulge in the crownshaft before the flowers emerge which gives the tree a "pregnant" look.
Remarks: Archontophoenix cunninghamiana is very similar to Archontophoenix alexandrae in both appearance and size. However it is much heavier looking than A. alexandrae , and consequently is more likely to be damaged by heavy winds. Thus it is often better suited to more sheltered areas, while A. alexandrae can take more sunny positions.

Cultivation and Propagation: Archontophoenix cunninghamiana is relatively easy to grow and very adaptable to soil type, but clay soil is much better than sand, or silt, because clay holds water, this palm is rarely watered enough and most planting don't look all that great, but it is a very fast grower if the water is kept up to it, averaging about 0,3-1 metre per year. A. cunninghamiana is a great palm in a boggy spot where the land has been raped, and drainage is not so good.
Fertilization: Need a perfect fertilizer diet including all micro nutrients and trace elements or slow release fertilizer.
Light: Prefers full sun (if the water is kept up to them) , or in the shade.
Hardiness: It grows in tropical, sub-tropical and milder temperate areas or under glass and is more cold-tolerant than Archontophoenix alexandrae. However it can be difficult to get it to look its best without a great amount of heat and sun and so it is only really suited to the tropics in frost-free regions (USDA Zones 10-12).
Drought tolerance:This palms like to be waterlogged, since their habitat is periodically flooded and in cultivation they appreciates very abundant waterings. During the summer or warmer months, water frequently (even every 2 days) to keep the soil from drying out. Under-watered specimens tend to yellow, have skinny, weak trunks and only hold 3-4 leaves at a time. Once established as a tall, sturdy tree, their water needs seem to diminish.
Aerosol salt tolerance: It is moderately salt tolerant, but does a lot better inland then it does on the coast.
Remarks: Large specimens drop their leaves that weigh several kilograms below, often crushing everything in their path. Pruning them early however, looks very bad and sets up the palm for infections. Just don't plant anything delicate are hard to weed around below them. A single plant can produce thousands of new seedling under it every year. And if you have a nice carefully weeded tropical garden below, this is a real pain.
Use: It is often used as an ornamental plant. While being very attractive individuals, it becoming quite common now to plant them in clusters and close groupings. Its very neat appearance and stature makes it perfect near highways and used to accent residential landscapes. It is also a very popular indoor plant, but really would prefer more light and fresh air. A shade screen patio will provide an excellent environment for young specimens which can eventually be planted in a sunny location. Its flower colour is violet and the red fruits are attractive to birds.
Traditional uses: Aboriginal people used the stems for weaving. Surveyors in the early part of European settlement used one chain lengths of the stems as standard measures.
Propagation: Propagation is by seeds.