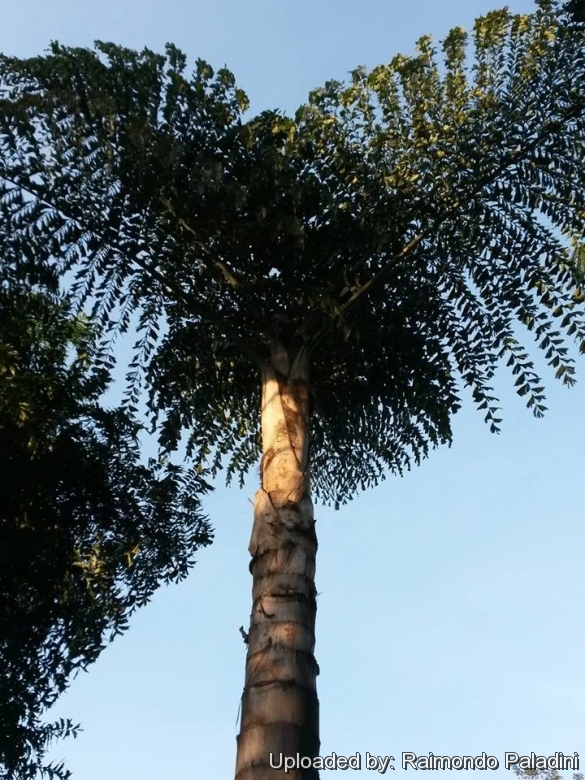 Description: This is a massive palm that in its native habit grows up to 35 (or more) m hight, but usually less than 20 m tall in cultivation. This tree will reach maximum height in about 25 years. It is considered by many the most beautiful of all the 'hardy' Fishtail Palms. It also has even spacing rounder leaflets creating a very appealing lacy pattern and, like all fishtail palms, it is monocarpic, lives a relatively short life and makes seeds only once when it dies. However, young caryotas are virtually indistinguishable. More mature ones are much easier to identify. Caryota gigas and Caryota obtusa are pretty much identical even when mature.
Trunk: Large, single, non-crownshafted, 1-2 m across at the base, with distinctive dark to almost black colour near the crown, that distingush this species from other fishtail palms like Caryota urens, Caryota maxima and Caryota mitis which have a white tomentum near the crown. Further down, the trunks become giant, grey, markedly ringed poles of solid material. (Caryotas have an extremely hard wood and some of the densest wood in all the palm world)
Crown: Very wide about 12 meters, so leave it lots of room.
Leaf type: Bipinnate, very firm, not bending upright easily; leaflets wavy, fern-like, often several off-tones of green.
Inflorescence: Flower stalk about 35 cm long coming from among the leaves.
Flower: Cream.
Seed: Dull grey. Round with groves. 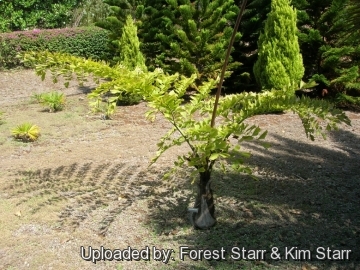 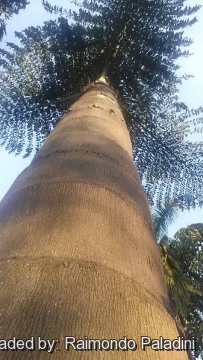 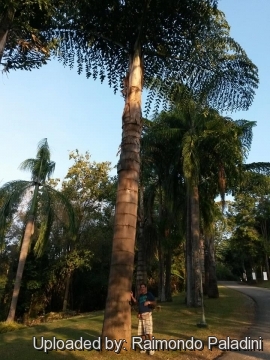 Cultivation and Propagation: It is an easy to grow palm that likes sandy soil, but is adaptable to clay and loam both slightly alkaline and acidic. Good drainage is also important. It is a medium fast grower, but it can grow extremely fast given the right conditions of warmth and humidity, together with a rich soil and an abundance of water. Caryota gigas vary in shape. Specimens raised in dry and/or infertile soils tend to be smaller in stature with smaller leaves. Light also affects the plant's form while those grown in full sun are more compact.
Fertilization: Need a perfect fertilizer diet including all micro nutrients and trace elements or slow release fertilizer. Micronutrient deficiencies are occasional problems. If it doesn't get enough Mn and Fe, the leaves take on a rather unhealthy yellow colour. Micronutrient deficiencies only show up on soil with a high pH.
Water Requirements: Needs regular water, do not let dry out between waterings. however it does not want to sit in continually wet, mucky soil. The roots and lower trunk can rot if soil is kept too moist.
Light: Prefers full sun but will tolerate half day sun.
Hardiness: It is one of the hardiest feather palms, tolerating temperatures down to about -2°C (or even less for short periods) when mature, young plants are more cold sensitive; it is widely cultivated in subtropical and warm temperate regions.
Maintenance: Prune diseased, damaged or drying fronds, but do not prune if the frond still has some green colour. Palms recycle nutrients from dead or dying fronds and use them for healthier fronds. Palms only have a set number of new leaves that can sprout and grow per year and removing fronds will not increase that number. If you cut off more than what will grow annually, you could be left with a pretty bare and bald palm.
Roots: Not a problem.
Propagation: Fresh seeds germinate in 4 months to 1 year to germinate in warm media and the seedlings are attractive.
Uses: Either as a single specimen or in groups, this is a strikingly beautiful species. Its very neat appearance and stature makes it perfect near highways and used to accent residential landscapes. Culture in containers is possible although growth rates are slower. A bright patio will provide an excellent environment for young specimens which can eventually be planted in a sunny location.
Warning: Flesh of seed and trunk is caustic to touch and should be handled with care and also Caryotas are prone to falling over in high winds while still alive, so careful where you plant this palm.